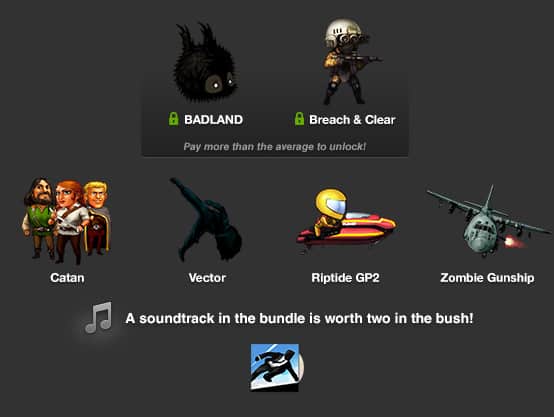 Yes it's that time again to round up a measly few bucks and throw it as hard as you can at the Humble Bundle team, and in return you'll end up getting some of the best games to arrive for Android devices in 2013. Just like every other Humble Bundle game pack, the bundle will be available for about two weeks, which is of course subject to change, and usually does if the popularity of the pack is immense. Upon such a time, the good folks over at Humble Bundle may(or may not, it's their call) end up throwing in extra games to add to the bundle. But enough talk! Now for the games!

In this glorious Humble Mobile Bundle which i'll refer to simply as Humble Mobile Bundle 4, you literally get some of the best games to come to Android from 2013. First up we have Riptide GP 2 which by all accounts was one of the best racing games to ever land on Android. There is so much eye candy here that if it were possible to give your eyeballs cavities Riptide GP 2 would be sending you to whoever would deal with such things every week. It's the slick and improved follow up to Vector Units popular original jetski racer, Riptide GP, and they really outdid themselves with this sequel. Next up is Badland, need I say more? Just kidding, of course I need to cause I know some of you may have never played it before. Basically, it's a platformer, but it's much more than that. It has single and multiplayer modes available which gives this game tons and tons of replay value. plus there are tons of levels available for play in the single player campaign, with awesome graphics and ambient music that plays in the background for an awesome audio sensory experience. It's worth noting that Badland in this bundle is the premium version of Badland which normally costs $2.99, and it's only available if you pay more than the minimum average for the bundle at the time of purchase.

Humble Mobile Bundle 4 also comes with Catan, which is an intense strategy board game that'll have you competing for control of the most armies and the most land. It supports two different visual modes designed to be played on devices with either lower or higher resolution displays. So you can choose to set the graphics for standard definition or play the game in HD. "Board" of strategy games like Catan?(see what I did there?) That's OK because this bundle comes with one of the best Endless Runners out there, Vector. It's an endless runner that's mixed with some parkour elements that you'll have to perform to dodge obstacles and jump from building to building at times. In Vector you're a guy who won't be held down by the man and you fight the system by attempting to escape your confinement. The bundle also includes Zombie Gunship(normally $0.99) which puts you in the gunner seat of an AC-130 gunship and you have to man the artillery and mow down as many zombies as you can from the air to save the humans below. Various weapons and challenges will give you plenty of mindless entertainment of laying waste to the zombie horde. Lastly, but certainly not least, is Breach and Clear. This is the second title that is included in the bundle only if you pay the minimum average amount at the time of purchase. It's a squad based tactics game where you have to "breach" enemy strongholds room by room, and "clear" each one making sure that each mission ends with you getting your entire squad out alive while leaving no enemies behind. You can of course pass missions if your team members die, but you get less accolades so don't do that. So there you have it. At current there are 6 total games included in Humble Mobile Bundle 4, (2 of which you can only unlock if you pay the minimum average amount for the bundle which is $3.51 at the time of this publication) and there's always the possibility that more games could be added into it. As always, whatever you to decide to pay can be divided up amongst the charity's, the Humble Bundle Team, and the developers, and you decide who gets what amount. Pay what you want, get awesome games. Enjoy!http://youtu.be/O42HrBYdUsE