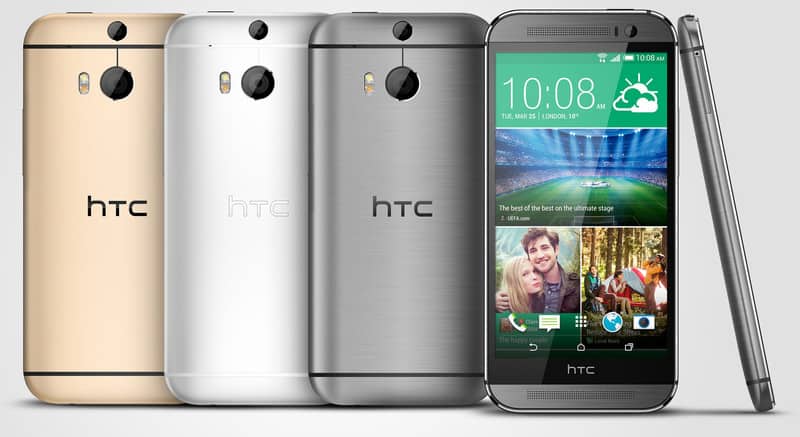 After a good solid month of leaks, HTC finally made the HTC One M8 official – including that name. For a while there we thought it would be called the All New HTC One, but HTC decided to just call it the One M8 which is a bit easier to read and write a hundred times today. The HTC One is also available in four different colors.  Of course, they couldn't just use regular names for their colors like Gold, white and gray. Instead they are Amber Gold, Glacial Silver, and Gunmetal Gray. Which the Glacial Silver is a repeat from last year. I wasn't a huge fan of the Glacial Silver and I liked the stealth black better. However with this years' colors I think I like the Gunmetal Gray a bit more. But they all look very nice.

As of right now, we don't have any confirmation, but we heard over the weekend that the Gold version of the HTC One M8 would be an exclusive to Best Buy. So that would mean no Gold version for those on T-Mobile since Best Buy doesn't sell T-Mobile phones. The Gunmetal gray has a nice brushed aluminum finish, which is probably why I like it so much. Compared to the Amber Gold and Glacial Silver which are using the same finish as last year's HTC One. Which isn't a bad thing, it just lets you know exactly how it's going to feel and look in person.

Verizon will have the HTC One M8 in-store today and available at 1pm ET, while you can order the others on HTC's website later today. I'm thinking the Gunmetal Gray might be a popular pick among those buying the new HTC One M8, what do all of you think? Be sure to let us know in the comments below.