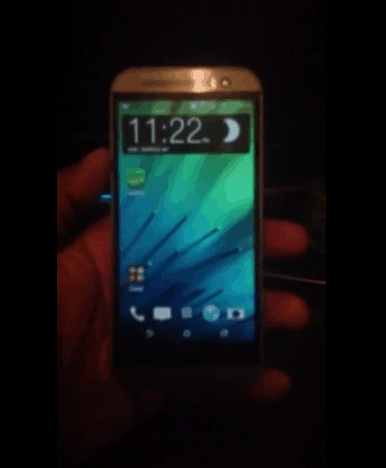 At this point, HTC should just put out a press release about the All New HTC One. As we have already seen it in plenty of "hands-on" videos. Last week there was the kid that uploaded the 12-minute long video, which turned into quite the drama during the Oscars. Now it appears another uploader has uploaded a shorter, darker video to YouTube. It has already been pulled down, but we have a mirror for you to check out if you missed it.

The video really doesn't show us much more than we already know about the phone. This phone appears to be the T-Mobile version as you can see all the T-Mobile bloat on the device. It also appears to be called the HTC One M8. The uploader also says there's a 16GB, 32GB and 64GB models coming out. This one looks like it's the gold version, but then again it's hard to see in that lighting so it could be another color altogether.

There are all the other apps you'd expect, like the HTC Backup and HTC Apps hub just as we saw on the HTC One when that released last year. There's also the Parent Dashboard, Mobile Hotspot and ISIS Mobile Wallet, however those are carrier specific, you also have the Google suite of apps, which isn't surprising to see as it needs to be Google certified anyways. The one thing we did learn, however, is that it's now basically confirmed that the HTC One is coming to T-Mobile and AT&T. It'll likely hit Sprint and Verizon as well, but we haven't seen those variants just yet.

You can check out the video down below in case you missed it, but it is a bit tough to watch. However this guy is much easier to understand than the kid from last week. Be sure to leave your thoughts down below.