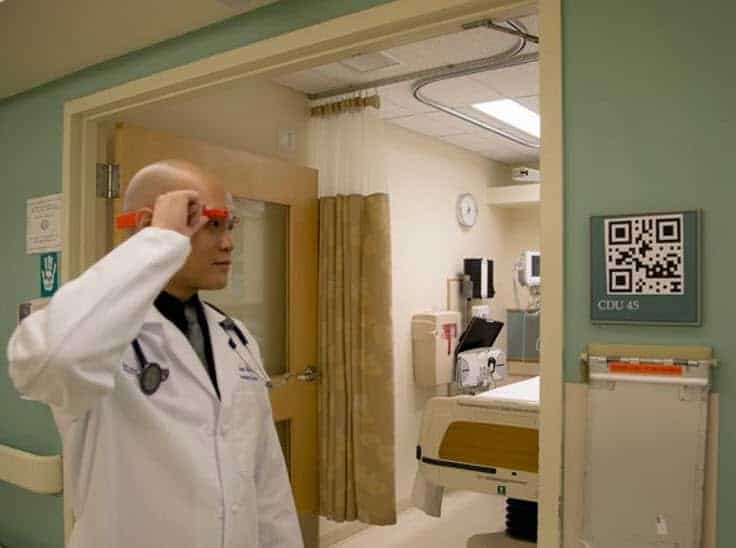 Most of our readers know that I am a huge Google Glass fanboy (more like old-man), so it amazes me when readers say that Glass is nothing but a useless toy or a piece of technology that is looking for a problem to solve.  I guess because they don't function on a 50-inch display and have bombs exploding and machine gun-like sounds, Glass is a useless toy.  We are only beginning to scratch the surface of what this technology called Glass is capable of doing.  As more Apps are developed for the medium and as Google continues to refine them before they are released later this year to the public, their usefulness will have no boundaries.

Most hospitals are into technology, especially the larger ones that have the resources to experiment.  One such hospital is Boston's Beth Israel Deaconess Medical Center where they developed a custom retrieval system for Google Glass that allows an ER doctor to a scan a Quick Response (QR) code on the wall of each room.  By doing this, it allows the doctors to call up information about those specific patients.  Dr. John Halamka, Chief Information Officer (CIO) describes how the system works in his blog:

In the Emergency Department, we've developed a prototype of a new information system using Google Glass, a high tech pair of glasses that includes a video camera, video screen, speaker, microphone, touch pad, and motion sensor. Here's how it works. When a clinician walks into an emergency department room, he or she looks at a bar code (a QR or Quick Response code) placed on the wall. Google Glass immediately recognizes the room and then the ED Dashboard sends information about the patient in that room to the glasses, appearing in the clinician's field of vision. The clinician can speak with the patient, examine the patient, and perform procedures while seeing problems, vital signs, lab results and other data.

They have been using this system for the past three months and will now make it available to all interested doctors later this month.  To safeguard privacy issues, Halamka wrote: We replaced all the Google components on the devices so that no data travels over Google servers. All data stays within the BIDMC firewall.

While they will not yet replace the tablets that are the norm, what is so exciting to them is that the information is real-time and can deliver actionable information immediately.  Halamka believes that Glass will eventually replace tablet-based computing because it allows the doctors hands free operation and instant access to information. When asked how the patients reacted to the Glasses, he said they were intrigued, and the more tech savvy ones asked detailed questions about how they worked (that would be me).  Halamka's team had to make some modifications, including:

Halamka said there have already been a couple of examples of how having the real-time information provided by this Glass program could have possibly saved lives.  That does not sound like a "useless toy" to me – and this is only the beginning. Come on up to our Google+ Page and let us know how you feel about Google's Glass – a toy or serious product?