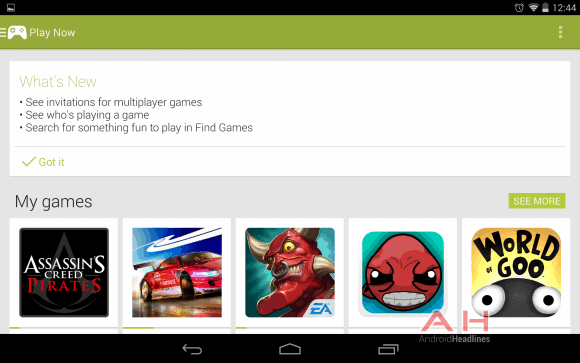 Whether or not you've been an advocate for the Google Play Games app from its inception or not, you might start to use it more often now with the latest update. The update isn't quite live on the Play Store just yet but it should start rolling out to devices soon. Expect to get it somewhere between now and the next few days. Of course, there's no reason to wait if you want to jump right in and take advantage of the latest features, as we'll have the link for you to download it here. Let's go ahead and go over what some of the changes are in this new update to Google Play Games.

First off, when you tap on any one of your games from within the app, if that particular game has Google Play Games support it will have a Players tab which you can now swipe over to, and you can now see who from within your circles is playing that game. That is of course if there are any. For example, I seem to be the only one in my circles who cares to play Assassins Creed Pirates, as shown in the image below, but plenty of people in my circles are playing Badland, and a couple of my friends are playing RidgeRacer Slipstream.

The next new change is that you can now view invitations you've received to play multiplayer matches for games that have multiplayer Google Play Games support. Before the update, you were able to join multiplayer games from the app but you weren't able to see if someone had invited you. Noone has invited me yet.(*sad face*) Google has also moved a couple of things around within the app, and added/changed a couple categories. Settings no longer resides in the top right corner by hitting the button with those three dots. It's now in the sidebar along with all the other categories. You'll also notice the addition of the Matches category, and Recommended Games has been renamed to Find Games. As we said above you can download the apk for the app here with this link, or you could choose to just wait it out and see the update pop up through your notifications. Where's the fun in that though?