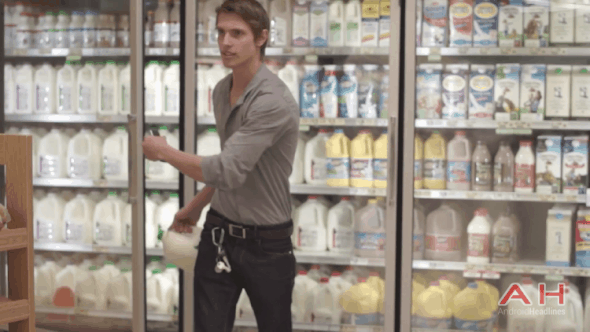 One of the single most boring and sometimes frustrating things we have to deal with on a constant basis is waiting in lines at the grocery store. Not only can it sometimes be way too crowded, but more times than not it's a huge waste of time. Thank god for the self checkout, which was quick to overtake most supermarket express lanes for those individuals who only had a few items to buy before they went about their day. Interestingly, we spend about 7 total hours each year waiting in Grocery Store checkout lines. We can go ahead and assume that this includes the self checkout that I was just praising moments ago. In addition to that, we also eat up about 9.6 million trees each year to provide the paper for receipts printed out at checkouts. Not only is this a somewhat archaic way of doing things, but with today's technology we're using resources that we don't have to, and it's a major surprise that there hasn't really been a widespread way of bypassing the checkout lines at Grocery Stores so far.

We have apps and virtual companions for use with just about everything else in our daily lives, all accessible from our smartphones. We can pay for things using Square at major retailers and plenty of smaller local shops, and even use tap to pay and other mobile wallet apps to pay for things at many other various retailers, after which we're emailed a digital receipt for the goods we've purchased. The only type of place you really don't see this type of technology instituted is in Grocery Stores. A new app called Fastlane wants to change all that. They want to help us eliminate waiting in the checkout lines, which in turn would speed up our shopping experience, and avoid the need for paper receipts since we could be given a digital receipt for the items purchased. The team behind the Fastlane app concept has put together a great little video that describes how the details of the Fastlane checkout system could work inside major grocery store chains and supermarkets. The problem at this point in time is getting those supermarkets on board with such an idea.

In short, a user of the Fastlane app would setup a free Fastlane account and add in various ways of payment just like you would do for Google Wallet or PayPal, then while later shopping at the grocery store they could scan in items that they want to pick up using the Fastlane app, which would give them a total cost balance for all of their groceries. When ready to checkout, users could do so right from the app itself, and proceed to a designated Fastlane kiosk which could be located near the front of the store, where they would scan their digital receipt, to complete the checkout process and help prevent shoplifting, and also bag their goods. This could truly revolutionize the way we shop for groceries or any item as Fastlane wants to see this type of system be made available in locations past grocery stores. You can help spread the word about Fastlane by going to their website and joining the movement to start this process. Check out the short video below to see what it's all about, then hit the link to join the Fastlane movement. Seriously, why aren't we doing this already? Waiting in grocery store checkout lines is horrid. We all have better things to do with our time.