Acer is probably more known for their Chromebooks on Android Headlines. As we’ve been big fans of the C710 and C720 Chromebooks. But Acer also does Android tablets,which we’ve reviewed a few of them in the past year or so. None of them really blew us away like the Nexus 10 did – especially with that screen – but for the price, they’ve all been rather great tablets. The Acer Iconia A1 is going to be priced at $179, so we’re going to remember that throughout this review, that it is a sub-$200 tablet, and we’ll probably make some comparisons to the Nexus 7 2013, since it is only about $50 more than the Iconia A1.

As far as specs go, Acer has packed in a rather unique spec-sheet here. We’re looking at a 7.9-inch 4:3 aspect ratio 1024×768 resolution display. It’s powered by the Intel Atom Z2560 processor (which is the same processor from their C720 Chromebook), also there’s 1GB of RAM, 16GB of internal storage, 5-megapixel camera on the back with a 2-megapixel front-facing shooter along with the usual GPS, WiFi 802.11 b/g/n, Bluetooth 3.0 and a microSD card slot. 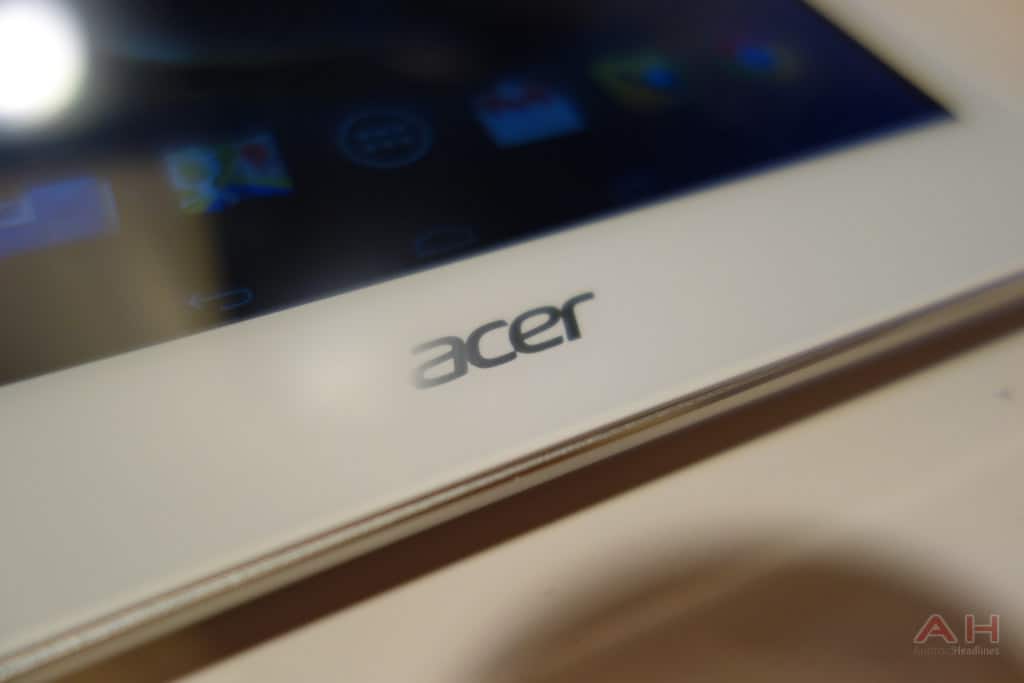 The display on the Acer Iconia A1 isn’t going to get a lot of praise from us. Especially after using 1920×1200 and 2560×1600 resolution displays for the past 6-8 months. A 1024×768 display should not exist in this day in age, but that’s just my opinion. As far as the 4:3 aspect ratio goes, I think it’s a good idea – I’d just like more pixels. I did, however, notice that the touch sensitivity on the display isn’t as good as it is with most other devices. For instance when selecting an option, I have to sometimes touch it a few times for it to register that spot. It’s not a huge deal, but something that can get annoying real quick.

As far as the screen size goes, I think 7.9 to 8.3 inches is the sweet spot now. It’s a smaller tablet, but not too small. It’s a bit wider than the Nexus 7, so I can’t quite hold it with one hand, but I do still like the form factor here. 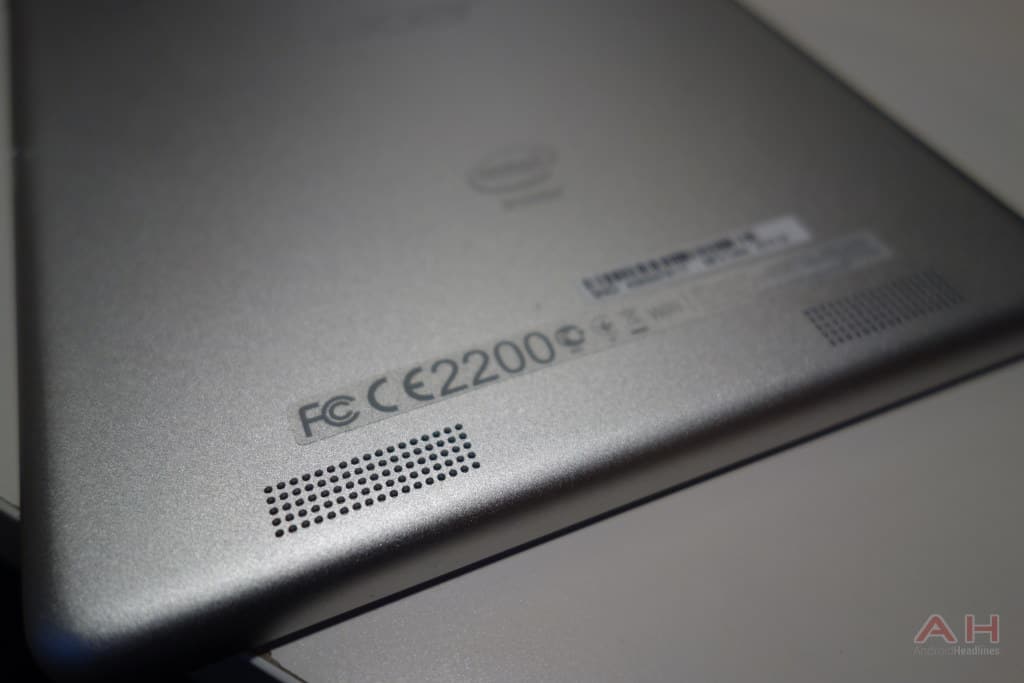 The build quality here is really nice I think. On the back you’ve got aluminum and polycarbonate at the top of the back – where all the ports are. On the front it appears to just be a sheet of glass. The bezels aren’t too big either. Now they aren’t tiny like LG does on their G Pad 8.3 and G2, but they aren’t as big as the Nexus 7 2013. It feels really nice holding it in hand, and it actually looks really nice as well.

On the right side, you’ve got the power button and volume rocker, with nothing on the bottom or left sides. Up top is your microUSB port for charging, a microphone hole, and a 3.5mm headphone jack. Then on the back is your 5-megapixel camera and dual speakers toward the bottom, which actually are kind of good. 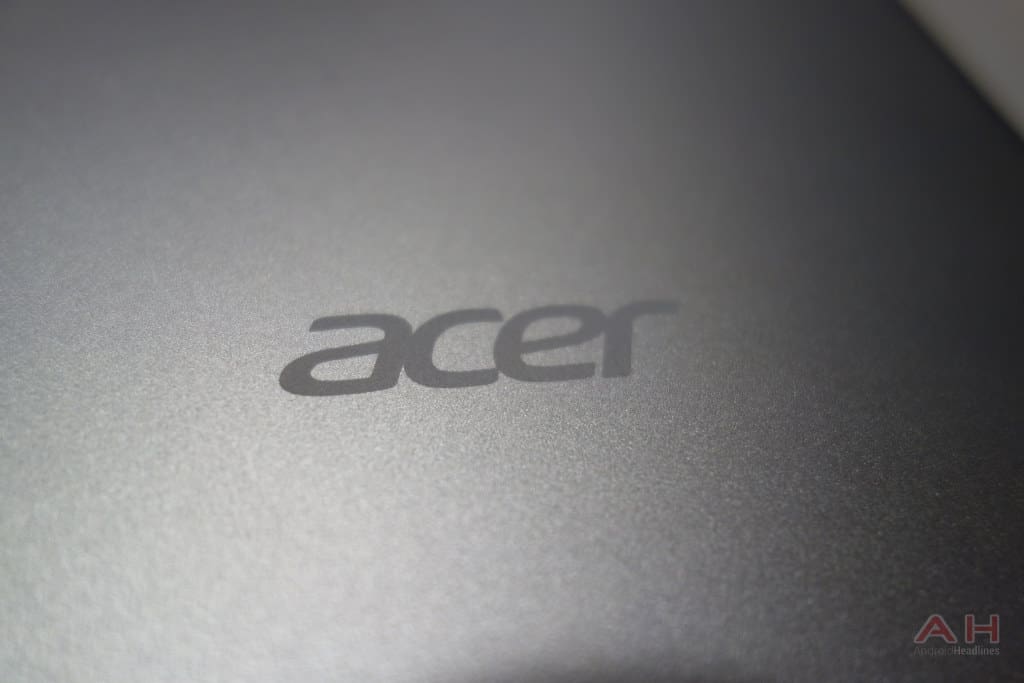 To be honest, this is the first Android-powered device I’ve used that runs on an Intel chip. And there were no surprises when it came to performance. It’s clocked at 1.6GHz, so it’s not the fastest, but it can definitely handle just about everything you throw at it. I was able to play games like Asphalt 8 on there and switch to other apps like Talon or Google+ with ease, which is what I like to see. Now obviously it won’t outperform the Qualcomm Snapdragon 800. 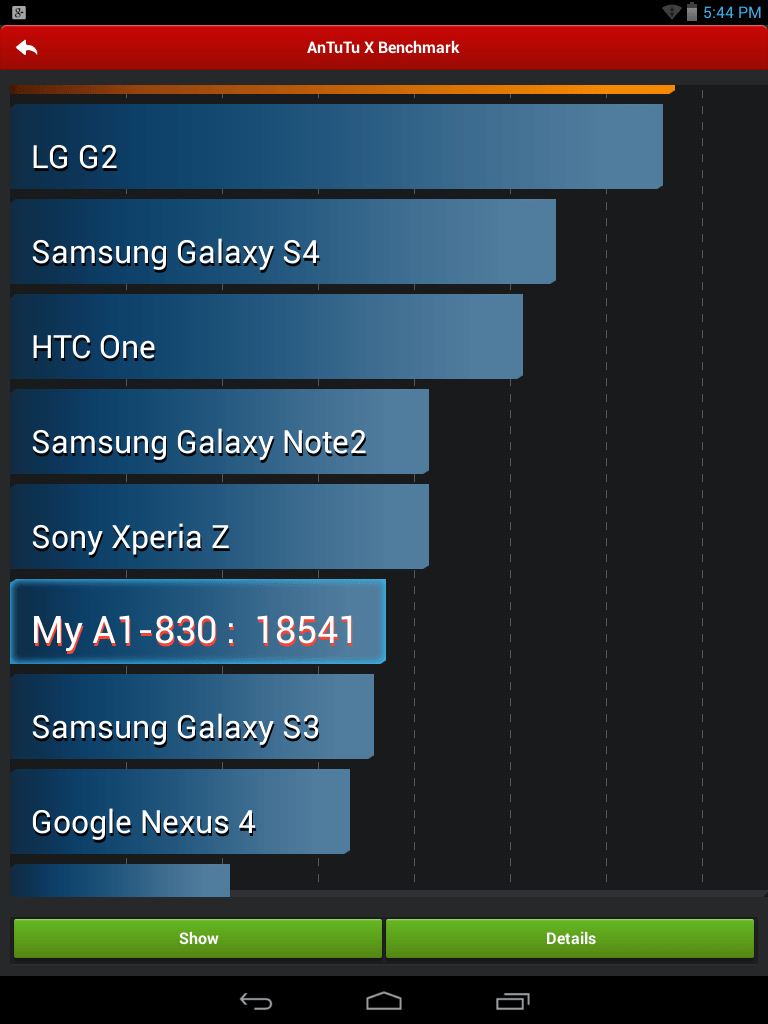 As we normally do with reviews, we ran AnTuTu benchmark on this bad boy to see how well it did. It didn’t do as bad as I thought it would do, given the specs it has. The results are shown above. It’s also important to remember that benchmarks don’t equal real-world use. And many OEMs have tried to cheat the benchmark-game, but I used AnTuTu X which is supposedly to catch the cheaters, so that should be the real benchmark score. 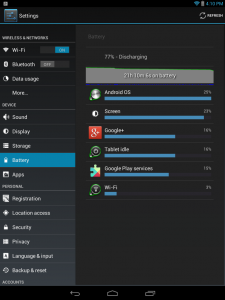 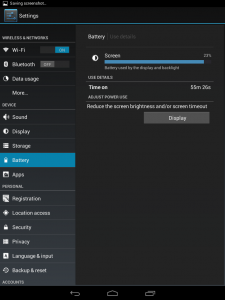 The Iconia A1 has a 4000mAh battery inside, so it should last you just about the entire day. You can see my results above, I was actually quite pleased with the battery life on this tablet.

Sadly, it’s running Android 4.2.2 – Jelly Bean. There’s no word on when Acer is going to update this to Android 4.4.2 – KitKat, but hopefully it’s rather soon. As far as their overlay goes, it’s not as bad as some that are out there. For the most part the only changes are the way the icons look in the quick settings and there some bloat along with some Acer widgets. Nothing too bad like Touchwiz, or even Sense to an extent.

The Iconia A1 can run Android 4.2.2 very smoothly. I didn’t have any issues with lag at all while using the tablet. Which, given the specs, isn’t surprising but still great news. It does come with a few bloat apps on-board. But most – if not all – are able to be disabled, which is also great news.

As stated in the specs portion at the beginning of this review, the Iconia A1 sports a 5-megapixel camera on the back and a 2-megapixel front-facing shooter. You can see the images below are from those cameras. It’s not the best camera out there, but its enough to get by. I wouldn’t want to take a picture with a tablet anyways, but it’s still nice to have it there. If you’re looking for a cheap tablet or e-reader to use around the house or on the road. Then the Acer Iconia A1-830 might be a good tablet for you to check out. It is only $179, but if you are looking to spend less than $250 on a tablet, I’d urge you to grab the Nexus 7 2013, even though it doesn’t have a microSD card slot. Comparing the Iconia A1-810 which I reviewed early last year, to the new Iconia A1-830, there’s a lot of stuff that has been upgraded. Although it’s still running Android 4.2.2 sadly enough.