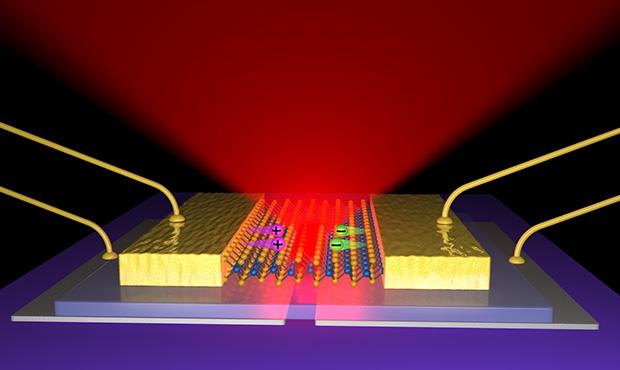 Who needs a smart watch, when you can have a display right in your sleeve? The technology to do just that, has been created by scientists, and its small enough to place even in a window, or windshield. A display that uses LED's that are extremely thin, strong and flexible, making them easy to use in portable devices. Ok,so maybe they wouldn't be as functional as a touch screen display on a smartwatch or smart phone, but the technology is getting there. This is just an exciting step towards smart clothing and windows, and who knows what else. Works published go into detail about the project hit the web recently.

Xiaodong Xu, an assistant professor at the University of Washington and co author of the papers published, said, "We are able to make the thinnest possible LEDs, only three atoms thick yet mechanically strong. Such thin and foldable LEDs are critical for future portable and integrated electronic devices." The scientists used tungsten diselenide, which is a part of a small family of materials known to man to be the thinnest semiconductors around. This material made it possible to make the thinnest LEDs around, and possibly change the future of electronic devices. These new LEDs are up to 20 times thinner than LEDs that are currently being used in consumer electronics. The possibilities are endless, but the scientists behind the work suggest these new LEDs can run nano-scale computer chips. Jason Ross, co-author of the papers published, says, "These are 10,000 times smaller than the thickness of a human hair, yet the light they emit can be seen by standard measurement equipment." Ross continues to say, " This is a huge leap of miniaturization of technology, and because it's a semi-conductor, you can do almost anything with it that is possible with existing, three-dimensional silicon technologies."

Even more possibilities than consumer electronics are suggested by XU. Xu suggests that since their findings consume less energy, the possibilities can be expanded into "…lighting, optical communication and nano lasers." Though the procedure to produce these LEDs needs some improvement. Currently, researchers are using the Scotch tape method. This method is done by taking a thin sheet of tungsten diselenide, only a few atoms thick. Then to that sheet, they take Scotch tape, and apply it to that sheet, then remove. Repeat this step over and over until you are left with a single 2D layer of the tungsten diselenide. They use this material, because it is capable of producing any color in the LEDs, according to a report from MIT. Due to the strength and flexibility of the material, it can even be integrated into clothes. Smart sleeves anyone?

Once they have figured out a way to produce the same end results, without the tedious Scotch tape method, mass production can be realized. The only other problem standing in their way revolves around the chemical structure. Used in the chemical structure is selenium, which is a rare element. So there are still enough obstacles in the way that pose doubts that we will see these super thin LEDs consumer ready anytime soon. However, scientists have been known to think their way through a problem, so who knows. What would you want to see done with this technology? smart sleeves, shirts, windshields, maybe inject these LEDs just under the skin like a tattoo, and make notifications always within reach? May have got carried away there, but you never know.