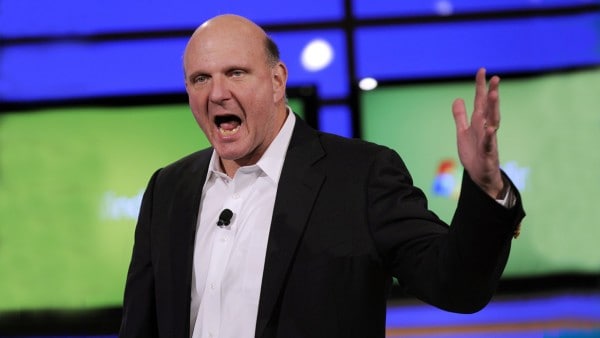 Speaking at the Sa¯d Business School in Oxford, U.K., Steve Ballmer, a month retired from Microsoft, spoke for an hour about what he should have done differently while he was CEO of the company.  Possibly, when you are actually in the CEO position of a large company such as Microsoft, you cannot see the individual trees in the big forest that surrounds you – while those of us sitting on the outside looking in, can see a disaster in the making.  Such was the case of Ballmer at Microsoft…he never quite grasped the importance of the mobile segment of the market and was always concentrating on the next Windows for the PC – Vista, he admits in this case.  I wonder if he would like to fix that little snafu while he is on the ride in his "time machine."

Ballmer wishes he could go back ten years – "We would have a stronger position in the phone market today if I could re-do the last 10 years."  He said what needs to be done now is to 'pickup and catch the next wave.'  To follow Ballmer's surfing reference, he believes he started riding that wave by purchasing Nokia Corporation for a mere $7 billion, and that was probably Ballmer at his finest hour while at Microsoft.  They let Stephen Elop 'get away' from Microsoft and Nokia hired him for their CEO, where he promptly tied Nokia to an exclusive contract to produce the Windows Phone.  When that strategy did not work, Elop orchestrated the sale of Nokia to Microsoft, and then promptly received his job back at Microsoft – probably doing all of this on a promise from Microsoft that he would be considered for their next CEO.  Thank heavens Microsoft had enough sense not to make him CEO, but instead promoted Satya Nadella, where he is promptly 'cleaning house.'

I am surprised that Microsoft kept Ballmer around as long as they did – the company continued to make profits on products developed long before he became CEO and I suppose that was enough to keep the BODs and shareholders happy. He joined the company in 1980 and has been their CEO since 2000 – and what do they have to show for it as far an innovative growth in a new direction? Microsoft missed out on the search engine, allowing Google to grab that title, and instead of refining and improving their own Bing, decided to set out on a smear campaign – Scroogled – to discredit Google.  They never even stepped into the social media game or even saw it coming.  This new field will forever change the way companies advertise, market their merchandise, and even sell their product – yet Microsoft could not forecast its arrival, nor make changes to accommodate it now that it is upon them. When asked about Facebook's $19 billion acquisition of WhatsApp, Ballmer gave us another look at his indecisiveness and lack of the social media knowledge:

"Is it a fad?  Well, probably not.  It looks more like text [messaging.]  I don't know whether they'll be successful or not.  Will that asset ever be worth anything?  Will those 450 million people ever generate enough revenue?  Reasonable people – Zuckerberg believes so, and no reason to doubt it."

Their biggest miss was the rapidly growing mobile market, and quite possibly, we still are only touching the tip of this giant iceberg, but at the very least Microsoft should have seen the huge changes that were occurring in the mobile market segment and jumped onboard.  Like BlackBerry, that was already instilled in the mobile market, poor decisions and marketing have driven that company to the brink of bankruptcy – what has kept Microsoft going these past ten years with Ballmer at the helm is their other products and diversity.

In its latest report on market trends, researcher Kantar calls Windows Phone "the fastest growing OS in the world."  They claim that when Nokia went after the low-end market last year things started to turn around for the Windows Phone platform, although it is easy to be the "fastest growing OS" when you control such a small part that any increase makes your percentage of growth look great.  It seems that they are reading the same tea leaves that have guided Ballmer through his handling of the mobile market.

When pressed, Ballmer said his toughest decisions were in the hiring of new people and knowing the right ones to fire – not about guiding and improving the company, although he said he still cares about Microsoft's continued success:

"I'm a very interested board member.  I own 4% of Microsoft.  I care a lot about my child, and my investment, and therefore the investment of the other owners of our company."

When asked what it was like to be so powerful and wealthy, and instead of saying something profound like – with great power comes great responsibility – Ballmer says, "I can play just about any golf course I want."  That is real vision speaking right there…FOUR!