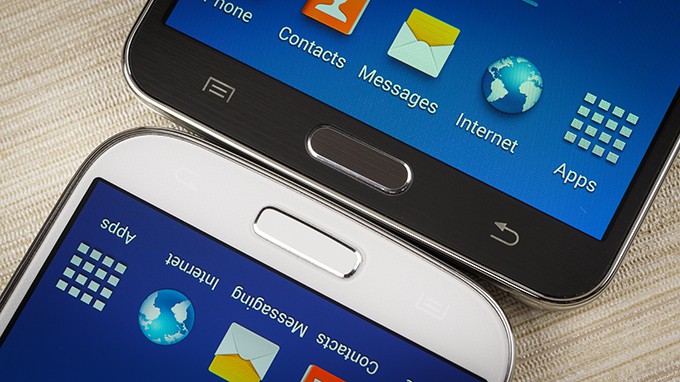 Whether you are a Samsung lover or hater, both camps can agree to disagree on one thing – that damn physical home button that has graced both their 'S' and 'Note' series of smartphones and even their tablets for quite some time. Each new model release when the rumors start-up, one of them is inevitably about whether Samsung will keep or finally get rid of their physical home button. Each year the rumors grow that Samsung has finally 'wised up' and will get rid of the physical button, but each year it shows up on the device and people will be like, "When is Samsung going to ditch that antiquated, Apple-like, physical button and go for all capacitive buttons like everybody else." What is it about that physical home button that keeps Samsung from ditching that clunky looking thing on the front of its flagship smartphones? It certainly is not so that Verizon can 'advertise' on it like a small billboard like they did on the Galaxy Note 2 (see below).

From what we have found out, even within the walls of Samsung there are two fractions – the 'button' and 'non-button' people – and in the end the 'button people' won out. Some Samsung insiders say it is part of the phone's 'identity' or heritage and they do not want to offend the over 200 million users and force them to change over to the three capacitive button arrangement that is so much the norm these days. The physical home button helps separate Samsung from the other devices, kind of like their 'trademark' and they do not want to tamper with it and alienate their customers. So why then is there a strong in-house group clamoring for the physical button to go away? By incorporating their fingerprint reader into this physical button, Samsung seems to be solidifying its stand on keeping the button, although Samsung may move to the Iris Scanner in the near future eliminating that reason to keep the physical button.

To find out the real reason that Samsung keeps their physical home button, I think we need look no further than their arch rival, Apple and its insistence on having a physical home button on every iPhone since its inception in 2007. Like it or not amongst us Android users, the iPhone is a tremendous success because of its intensely loyal subjects – they obviously do not like change and they want things kept simple. They do not want the many options that we Android users enjoy – live wallpapers, widgets, launchers, keyboard options, etc. – they just want their iPhone to work.

Samsung, whether they want to admit it or not, are trying to build the same kind of loyalty that Apple enjoys with its customers. Apple has successfully used a physical home key, so Samsung believes they need to follow that same design. Apple incorporated their fingerprint sensor into their home button, so Samsung incorporates their fingerprint sensor into their home button…see a pattern here? Would Apple's customers be upset if their home button was removed, most assuredly – would Samsung's customers boycott them if they removed their home button, I doubt it. There are simply two different mindsets between iOS and Android OS – one group despises change and the other group embraces change, and I will let you decided which is which.

In the Apple camp there is really no discussion about the pros and cons of a physical home button and it is just accepted that it is an integral part of the iPhone culture – one smartphone design with a home button and nobody argues. With Android we have multiple manufacturers and multiple designs to choose from so it opens up the door and practically begs for discussions regarding pros and cons on just about every design difference among the OEMs and certainly one glaring difference is physical vs. capacitive keys. Before I bought my first Samsung, I avoided buying certain devices because they had physical keys – to me it was just something else to break or pop off. But when Samsung released their Galaxy Note 2, I just had to have one…I'm not sure I even realized that it had the physical home button had it not been because it had 'Verizon' plastered all over it. I'm sure you recall those debates about the gall of Verizon plastering their name on the home button! Truth be told, it did not bother me in the least – the same thing with the physical home button…I actually grew to where I love it. Now would I not but the Galaxy Note 4 if there were no physical button – hell no – I really could care less…but I do like having it there.

And I think that is where Android users are more flexible than Samsung gives us credit for…I love being able to use the physical home button to jump to opened apps, clear all of them away, or simply jump back to the main home screen. I never thought I would like it, but I soon realized there was a certain 'value' to having it. Would I stop buying Samsung if they did away with that physical button…absolutely not, and I think that if that is the ONLY reason, as some have suggested, that Samsung keeps it, I think they can rest assured the buyers would still stay with the brand. I am not so sure an iPhone user would be so flexible in their thinking – they want that physical button, they need that physical button, and sleep better at night because of that physical button (A Few Good Men reference).

Please let us know on our Google+ Page what you think about Samsung's physical home button – are you for it or against it or don't you really care – would you stop buying Samsung if they did away with it – or would consider a Samsung if they got rid of the physical button. We would love you to weigh-in your opinions on this hotly debated topic.