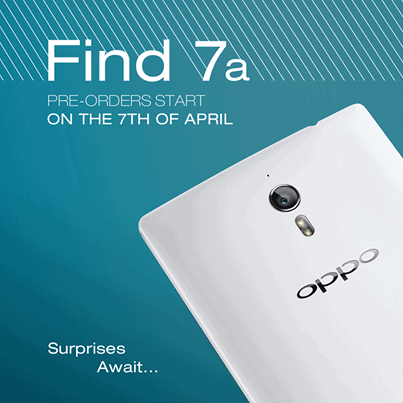 Oppo's upcoming 2014 flagship, the Find 7, comes in two flavors for you to enjoy.  The first has a 1080p screen and a 2.3 GHz Snapdragon 800 CPU, while the second model has a 2K screen and a 2.5GHz Snapdragon 801.  Many were more intrigued by the 2K model simply because of the display density, but at 5.5-inches on both models a 2K display isn't necessarily going to be the biggest difference you're going to notice.  Not only that but there seem to be some calibration issues with the 2K display at this time, leading to a slight blue tint to the screen overall.  Not only that but because of the extreme bump in resolution up from 1080p to 2K, even the more powerful Snapdragon 801 can't keep up with the 1080p model in tests.  While the difference is likely negligible and probably not wholly noticeable in every day situations, the fact still remains that the 1080p model is looking like the better option right now.  Thankfully it's not only $100 cheaper than the 2K model, coming in at $499 instead of $599, but you'll also be able to pre-order it about a month earlier starting on April 7th.

Oppo even states that it'll be offering special promotions during the pre-order period until release, so check out their Google+ and Facebook pages to sign up for those promotions when they become available.  As we've seen from a few preliminary hands-on tests, the camera on the Oppo Find 7 is something truly unique.  The same 13-megapixel camera is found on both the Find 7 and Find 7a, and is capable of shooting in a new 50-megapixel mode that offers increased clarity and detail and reduced noise overall in just about every situation.  While those 50-megapixel pictures will take up around 10mb each, you can increase the built-in 16GB of storage with the microSD slot to give you nearly unlimited picture and video taking ability.  Don't forget too that both Find 7 variants will be able to record video in 4K resolution, which takes up a lot more space than 1080p video, so keep those SD cards handy if you plan on shooting a lot of 4K video with this beast of a phone.