If you follow things outside of just Android, you'll know that Google has a pretty big competitor in Russia that goes by the name of Yandex. Above is the Russian Cyrillic spelling of the word and of course, their main market is Russia. They're essentially a direct competitor to Google and offer similar services to Google, such as email, search an app store, and Android. Yandex is now moving into the realm of creating their own version of Android and then allowing manufacturers to flash the software onto devices before they leave the assembly line. In a bid to deliver a non-Google version of Android that's still compatible, Yandex seem to have taken the right approach with things here.

Yandex.Kit, as the new version of Android is known is simply a compiled version of the OS from the Android Open Source Project with Yandex's services, such as Yandex.Mail, Yandex.Maps on top of the stock build of Android. There are a few visual changes here, but for all intents and purposes, this is the Android we know and love. Without the Google. Instead of taking the route that Amazon has taken with the Kindle Fire, any existing Android user could pick up a device running Yandex.Kit and be familiar with it in minutes. There's no word on what version of Android Yandex has create the software around, but from the one screenshot we have, it looks like it could be Android 4.4 KitKat.

This is more about creating a Russian version of Android than it is anything else. Of course, Yandex will love the fact that manufacturers will soon be shipping versions of Android with just Yandex software installed. However, with tweaks throughout the OS relating to better accomaditng the Russian language, users should have a lot to appreciate. Such as an improved keyboard, and the ability to sort through contacts using both the Latin and Cyrillic alphabets.

Speaking about Yandex.Kit, Yury Vecher, Head of Software Distribution, had this to say: "We're ready to work with any company manufacturing Android devices, on any market. For Russia, Ukraine, Belarus, Kazakhstan and Turkey we offer comprehensive, out-of-the-box solutions, and for other markets we are happy to offer a set of key services that are essential for creating firmware." Devices running the new version of Android will be available in Spring on a pair of smartphones, the Huawei Honor 3 Yandex and Explay Flame smartphones, with tablets running Yandex.Kit expected this summer. 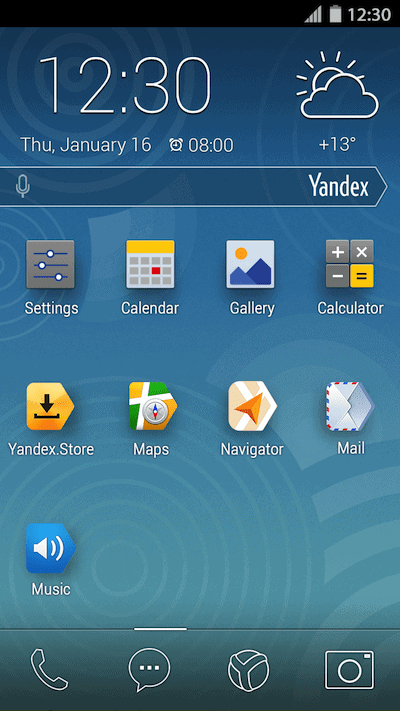