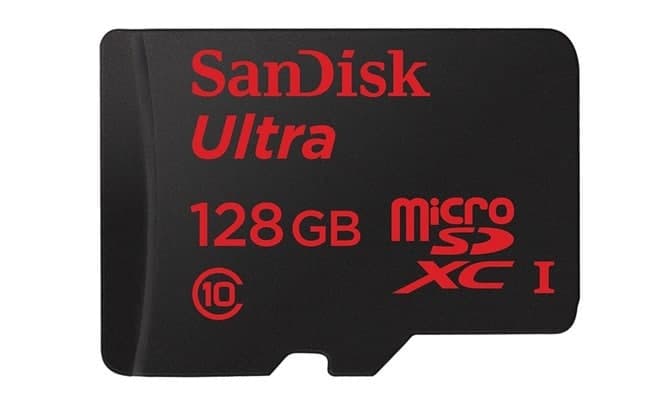 Sandisk seems to think 64GB on a microSD card is too small. So here we have a 128GB microSD card. The company announced this new MicroSDXC card this morning in Barcelona, Spain at Mobile World Congress. It's doubling the size of previously available MicroSD cards, which maxed out at 64GB. So this is a monster of a card. However, right now most smartphones can only handle a 64GB microSD card, so most phones probably won't be able to use this card right now, but I'm sure it will in the future. Could you imagine buying the 128GB Galaxy S5 that's rumored, and putting in a 128GB MicroSD card inside? That would be a lot of storage. No one would ever say they don't have enough storage then, or at least they shouldn't.

Obviously, Sandisk and their engineering team had to work pretty hard to get all those GB's into that small form factor. The card was developed using a proprietary technique that allows SanDisk to stack 16 Ultra-thin memory dies on top of each other. The end result was a tiny microSD card that can store around 16 hours of full HD video. Which is a 1,000-times increase in capacity in just 10 years. That's definitely an accomplishment.

These new MicroSDXC cards from SanDisk are on sale now from Best Buy and Amazon. Right now, the asking price for these are $199.99, however the price will probably go down once we see more 128GB MicroSDXC cards on the market.