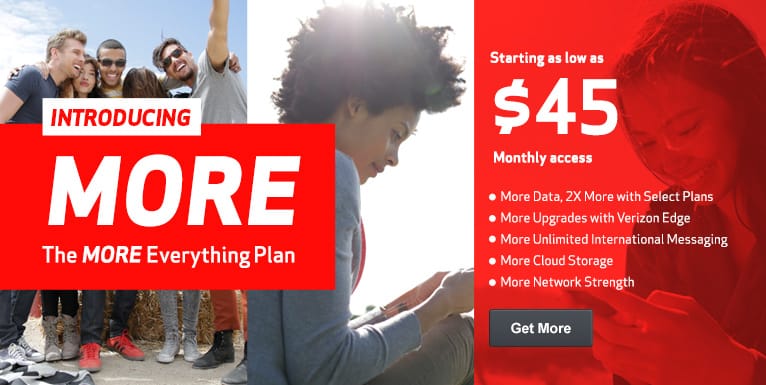 On Thursday, Verizon announced some changes to their Share Everything plans, and are now calling it MORE Everything. The changes are primarily to promote their Verizon Edge program, which is meant to compete with JUMP on T-Mobile. Basically, what Verizon has done is upped a few of their smaller data plans, giving the 500MB plan a bump to 1GB, the 1GB plan to 2GB and the 2GB plan goes to 3GB. Verizon has also taken $10 off smartphone access for those that have plans at 8GB or less of data. Those with 10GB of more get $20 taken off of Smartphone access. So for instance, if you have 3 lines with 10GB of data, your plan would cost you $100 for your data, plus $20 for all three phones, bringing it to $160. That's actually a pretty big drop, but remember you still have to pay for your phones with Verizon Edge. Also looking at AT&T's recently changed plans, you can get 4 lines of service and 10GB of data for $160. It's a bit hard to compare because Verizon EDGE and AT&T Next are a bit different. As EDGE is a 24 month payments, and Next is either 12 or 18 months depending on which one you choose. But it's looking like AT&T's plans are a bit better, in the long run. We do have a chart at the bottom of the post that show the breakdown, if you're interested.

I'm really liking the competition coming from AT&T and Verizon lately. And the reason why we didn't compare Verizon's new MORE Everything plans to T-Mobile and Sprint, is because their plans are completely different. Both T-Mobile and Sprint offer unlimited data, while AT&T and Verizon go for tiered data. So it would be a pretty big nightmare to compare. But for those interested, T-Mobile unlimited everything with JUMP starts at $80/month. That doesn't include the EIP for your device, which can be as high as an additional $24/month. And that's per line. Meanwhile, over on Sprint, they've gotten rid of their One Up program. But they do still have their Unlimited My Way. So you can grab a phone like the LG G2 for $0 on contract and pay $80 for unlimited everything.

How many of you are interested in Verizon's new MORE Everything plans? Is it something that you could see yourself getting behind? Be sure to let us know in the comments below.