Skip to content
Trusted By Millions
Independent, Expert Android News You Can Trust, Since 2010
Publishing More Android Than Anyone Else
18
Today
162
This Week
717
This Month
4561
This Year
122139
All Time When Samsung and Google announced the ARM-powered Samsung Chromebook back in 2012, they had made a pretty powerful statement. A laptop with great battery life and pretty decent performance, if you wanted to browse the web, that is. For a long time, this Chromebook from Samsung was a popular choice for a lot of people, but it didn’t last long and newer Chromebooks from the likes of ASUS and HP have superseded Samsung’s offerings. Now though, there’s word that there might be two new models on their way from Samsung, they’ve appeared up for pre-order at B&H here in the US, and they would be the first Chromebooks Samsung has released since the end of 2012.

There are two new models, both dubbed “Samsung Chromebook 2” on the B&H Photo website. One of which is an 11.6-inch affair with an “Exynos SoC” listed, which could be the new Octa-Core 5410 chipset. Moving onto something bigger, there’s a 13.3-inch model listed as well, with no mention of what processor this model is to feature, it’s possible that this could be their Intel offering. A lot of Chromebooks that have been released recently have featured a Haswell Celeron from Intel, and that seems to have helped a lot with their overall performance and a 13-inch model from Samsung with a Haswell CPU could be well received, indeed. Priced at $299 and $399 respectively, there’s no telling just when these devices will be going on sale, or even when they’ll be announced. Tomorrow’s Unpacked 5 event would be our guess, but there’s no way of telling for sure how committed Samsung is to the Chromebook cause.

With more and more Chromebooks hitting the market, from more partners, it’s looking like 2014 is going to be another year of growth for the online-platform. Toshiba has a Chromebook on offer now and ASUS is offering a Chromebox, too. More Chromebooks is a good thing and offers even more consumer choice, further boosting the platform’s credibility. 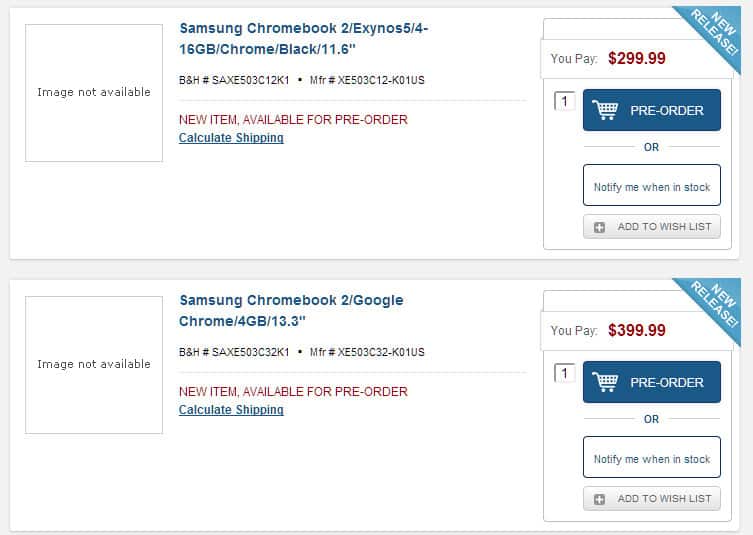