In the last couple of years, the smartwatch has gone from being a strange oddity reserved for geeks and the hyper-connected to something that everyone is a little bit intrigued about. Marketing from the likes of Samsung and their Galaxy Gear will have no doubt helped, but the runaway success that is the pebble has trickled into mainstream media as well. Smart designs like Sony’s SmartWatch 2 and the Pebble Steel have regular watch wearers paying attention to where smartwatches are headed and throughout 2014 we’re expecting big things for the smartwatch.

A strategy analyst group, the Smartwatch Group, has run the numbers on smartwatches and wearable technology. They’ve since come up with the Top 10 smartwatch and wearable manufacturers. The list is hardly surprising overall, but it does hold some surprising results. For instance, the mention of Garmn in the top three companies. With 3 Million smartwatches shipped last year, it’s clear that this is a growing market that will only continue to get bigger and bigger. Obviously, the Pebble is the darling of tech blogs such as The Verge praising it every turn, but Sony and their SmartWatch 2 isn’t far behind the Kickstarted wonder. According to the Smartwatch Group (a company based in Switzerland) Samsung is dominating with 33.8% market share, with Sony and Pebble taking 7.0% and 6.3%, respectively. We expect a table like the one below to look a lot different this time next year. 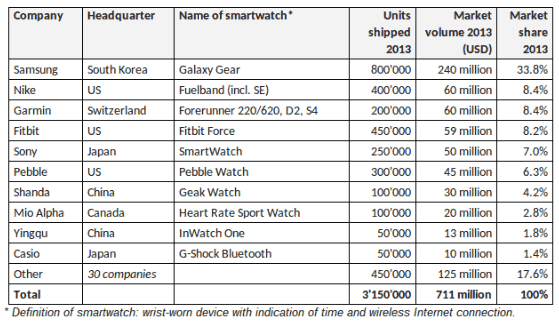 As noted by the group, software is going to be the big thing going forward, not hardware. Much like smartphones of today, there’s only so much you can do with the wristwatch. Pebble’s software is without doubt the best implementation of what people want from a connected device, and with Sony, Samsung et al all moving in their own direction it might be some time before standards are formed. Key software such as voice control on the Gear, and notification handling will get better over the coming year. As an owner of a Nexus 5 and Sony’s SmartWatch 2 I can definitely say that Google have made adjustments in Android 4.3 and 4.4 that better facilitate smartwatch manufacturers looking to better hook into Android. Apps like Smartmote and Remote Widget for the SmartWatch 2 show how versatile software development can be today. Meanwhile, Pebble has their own App Store, making discovery as easy as pie for new apps.

We’d love to hear from you on smartwatches, do you own one? Are you unconvinced? Is wearable technology a bubble waiting to burst or is the next big thing? Hit us up in the comments below or over on Google+!