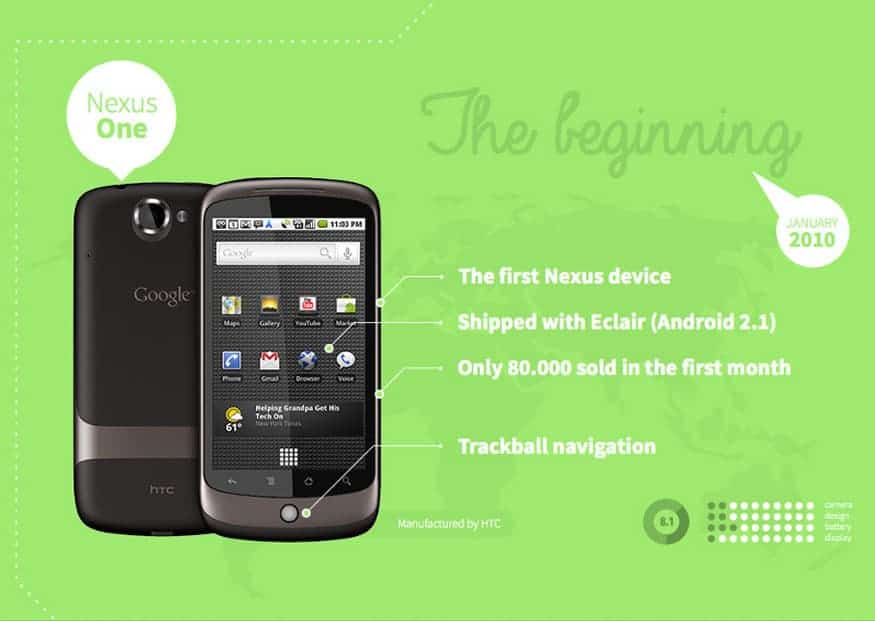 As Android fans, a lot of us will have had a brush with the Nexus line at some point or another over the years. For me, it was the Nexus One that caused me to start taking Android seriously, I couldn't afford the Nexus One at the time and instead settled for the HTC Desire, which was essentially the same phone. It wasn't the same though, and a year later I purchased the Nexus S and was happy with that until I upgraded to the One X. I was unhappy with how difficult HTC made it for developers to create great things on the device and when the Nexus 5 launched last year, I jumped at the opportunity and purchased one within 10 minutes of them going on sale. Whether or not you're a Samsung lover, an HTC die-hard or a Motorola cheerleader, the nexus line has had a big impact on Android and what the platform has become today.

Android me has put together a pretty interesting infographic covering the history of the Nexus line and it's five devices over the years. Right the way up from the Nexus One that started it all of to the Nexus 5 and its display chock full of pixels. It's an interesting look at how the Nexus line has evolved over the years and how it's kept the minimal and understated look that the Nexus S introduced back in 2010. Many of you out there might have owned more than one Nexus device – perhaps all of them? I've owned the Nexus S and the Nexus 5 over the years and have been pretty happy with them. I would like a better camera, something that is lacking in both the Nexus 5 and stock Android itself – which we covered in the review – but mostly I'm happy. What about you guys? Let us know about your Nexus experiences in the comments below and over on Google+! We've separated the Infographic in the gallery below for easy viewing and you can take a look at the full thing at the source link.