Skip to content
Trusted By Millions
Independent, Expert Android News You Can Trust, Since 2010
Publishing More Android Than Anyone Else
7
Today
256
This Week
101
This Month
7459
This Year
117414
All Time

Sony’s latest up-and-coming flagshi, the D6503 codenamed Sirius, it shaping up to be a real winner.  Although not everything on the initial rumor list has panned out to be true, the device itself is turning out to be a pretty significant upgrade over even the mighty Xperia Z1/Z1s which should say quite a bit.  The processor itself has seen a slight upgrade from the MSM8974AA that’s in the Xperia Z1/Z1s up to the MSM 8974AB Snapdragon 800, which is 100MHz faster overall.  We’re also looking at a 5.2″ IPS 1080p screen on this bad boy, hopefully eliminating the poor viewing angles and black levels that can be found on a number of Sony phones.  Sony’s also bumped the RAM up to 3GB from the 2GB found on the Xperia Z1/Z1s, and the Sirius is supposed to ship with that nice newly skinned Android 4.4.2 we saw leaked the other week.  While Sony is keeping the same 20.7 MP count on the camera, it looks like the software, the sensor or both have received a bit of an upgrade though, giving us some new modes to play with.

Those looking to stick with “plain old HD” video recording will now be able to record at double the framerate from before, all the way up to a full 60 frames per second.  If you haven’t seen recording at this framerate know that it’s incredibly smooth and will catch even the fastest of action without blurring or mess, and just overall looks incredibly clear.  Also worth noting is the new 4K video recording feature found in Sony’s camera software, allowing you to take truly future-proof videos for whenever you’re able to get that 4K TV in a couple of years.

There’s even a new still camera shooting mode available on the Sirius for 16:9 aspect ratio shots: 15.5 megapixel mode.  On the Xperia Z1/Z1s you could either shoot in 4:3 aspect ratio at 20.7MP or have to go all the way down to 8MP to shoot in 16:9 aspect ratio.  This was a sort of strange jump and wasn’t well explained, but thankfully Sony seems to have ironed out that mess with a proper cropped shot at 5248 x 2952 pixels.  No telling if the Superior Auto mode still scales down to 8MP or not but we don’t see much of a reason for Sony to change that since it super samples the image, giving you an overall cleaner 8MP shot than just about any other camera should be able to.  Sony’s got a winner up its sleeve here, and it should be hitting sooner rather than later based on the large number of leaks we’ve seen for the device recently.  Expect some kind of announcement in the coming weeks at Mobile World Congress in Barcelona. 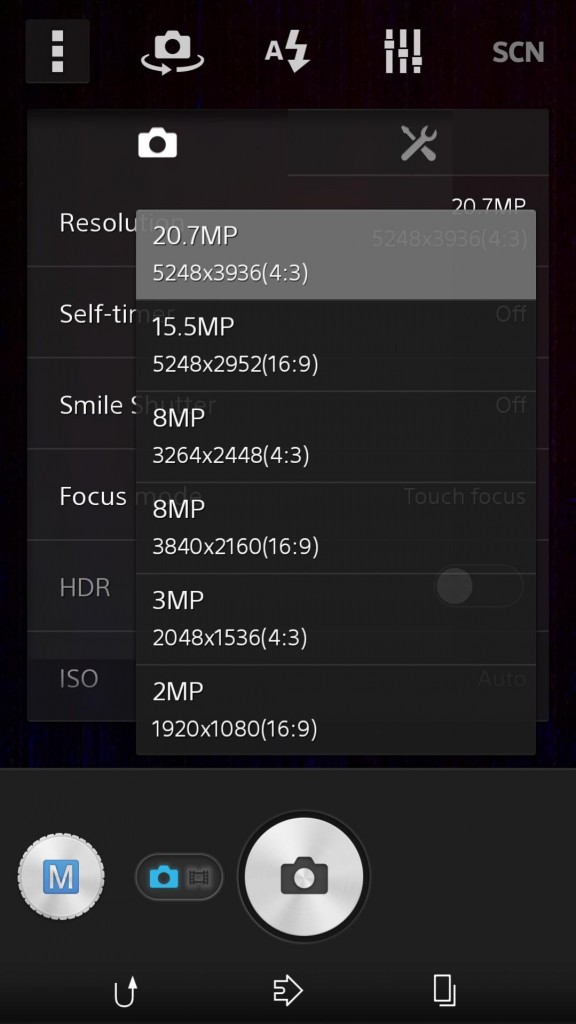