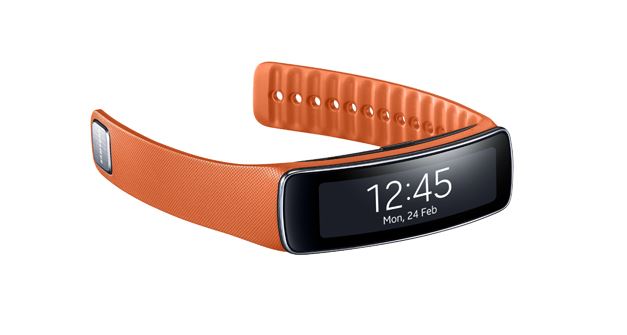 While Samsung had a few surprises in store for us at their Unpacked 5 event in Spain tonight, there was little we didn't know about. The Galaxy S5 itself had leaked out in its entirety before it was formally announced and the Gear 2 and Gear 2 Neo were announced earlier this past weekend. Still though, the Gear Fit was announced on stage as an intriguing device that seems to have a lot going for it.

The Gear Fit is designed from the ground up to integrate with the Galaxy S5 and will no doubt be trickling down to previous smartphones of Samsung's, too. In fact on stage, Samsung said that the Gear will be able to sync to 17 Galaxy devices, which is marked improvement from original Galaxy Gear we saw launch with the Galaxy Note 3.

Samsung's fitness band come smartwatch will be heading across the pond to the UK in April and will be competing with Sony's Core device. While Samsung hasn't announced any official prices just yet, Sony's Core is said to be retailing for â‚¬99 when it launches this March. As such, Sony's toned down wearable, which has Lifelogging and fitness tracking in its sights could give Samsung's Gear Fit something to worry about. Of course, we have no idea how the two will stack up when it comes to pricing as Samsung is keeping mum about price tags right now.

The Gear Fit however, is poised to satisfy those looking for a smartwatch and a fitness tracker, it's got a 1.8-inch Super AMOLED touchscreen, with a 432 x 128-pixel resolution that allows you to see notifications, take calls and more. Meanwhile, Sony's Core is wrapped around your wrist and aims to be discrete and more of a fashion accessory than anything else. One thing's certain though, the wearable market is heating up, and with very serious offerings – with very different aims – coming from both Sony and Samsung, there's soon going to be more consumer choice than anyone.