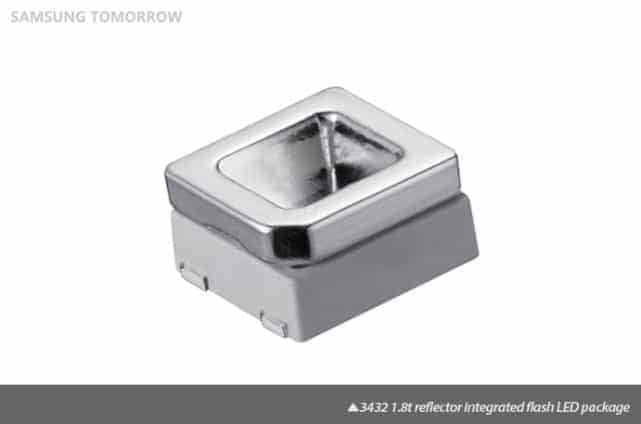 This morning, Samsung officially announced a lineup of new camera flash LEDs that will be in the next slew of Galaxy smartphones. Not just the Galaxy S5. The first is the 3432 1.8t (FH341A) reflector-integrated flash LED. It's designed for high-end mobile devices with cameras that require a wider field of view angle. The company confirmed today that this LED module will be used in its "next Galaxy smartphone". It also confirmed that it will be introduced "later this month". Not that, that is any news to us. We already know that Samsung is announcing the Galaxy S5 next week in Barcelona.

This new LED module provides a wide FOV, a lead frame, and a reflector with its own optics and diffusion features. It also will deliver over 165 lux at 1A, and a minimum color rendering index of 80. Samsung assures "quality photos in daylight and at night" with this new module. Samsung has another LED module, the 3432 1.4t (FH341B), which is specifically designed for mobile OEMs seeking "extra-slim LED solutions." This module is said to be only 1.4mm thick, making it ideal for devices that are 7mm thick or thinner. There's also a minimum illuminance level of 165 lux. Samsung also announced the LED 2016 (FH201A) this morning, which is a standard flash. Compared to previous methods, this LED relies on proprietary cell-film phosphor applied to "flip-chip" packages. The module offers 220lm of light output and improves color deviation by around 40% compared with the older technology.

So we've got plenty of new LED flashes here, which we'll probably see in most of the Galaxy smartphones announced in 2014. Including the flagships, Galaxy S5 and Galaxy Note 4. How many of you are excited to see how well they perform?