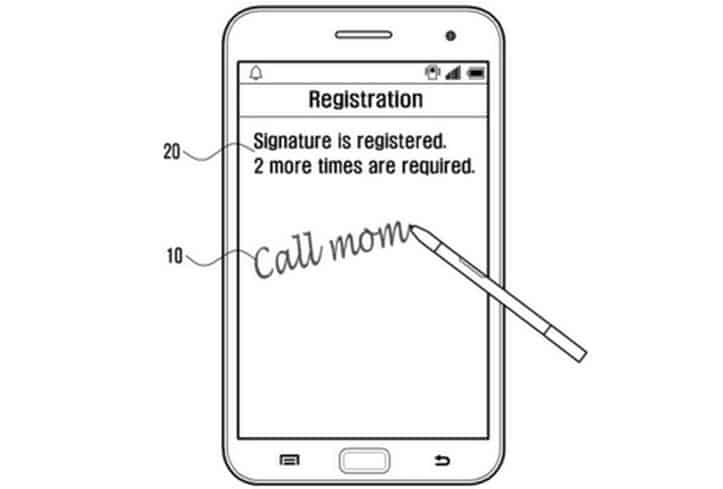 Samsung's Galaxy Note line has changed how a lot of us use mobile devices, not only because of their size but because of the S-Pen. The innovative stylus that Samsung first included in their devices back in 2011 gives us true pen input in the palm of our hand. It makes taking notes a breeze and if you're looking for something more fun, Fruit Ninja couldn't be any better than on a Galaxy Note. We've seen a Samsung come forward in the last few months that's eager to try new things and create interesting software experiences for us all. Their latest and greatest idea could be to unlock our Galaxy Notes using our handwriting.

PhoneArena discovered a recent patent application, US No. US 20140038557 A1 if you're interested, that details unlocking a device using handwriting. Security wise, it has to recognize your handwriting, which should hopefully keep people away that know your password. before the feature will be turned on, the Note will have to recognize your handwriting, as such you'll have to write a phrase a number of times before you can start unlocking your device. More than just yet another way to unlock your Note however, you can write certain things on the lockscreen, such as "Call Mom" to have the phone carry out that action. This is pretty neat, and actually makes great use of the S-Pen.

Perhaps this feature will make its way to the Galaxy Note 4, who knows? It's too early to be thinking about the Galaxy Note 4, but it is great to see that Samsung hasn't given up on new features they can keep on adding to their Note line of devices. There seems to be a sort of shit happening with Samsung's devices these days, with the Galaxy Note line feeling more and more like a flagship device than the Galaxy S. However, until the mainstream audience embraces large screen devices, the S-Pen won't make it into the hands of many users.