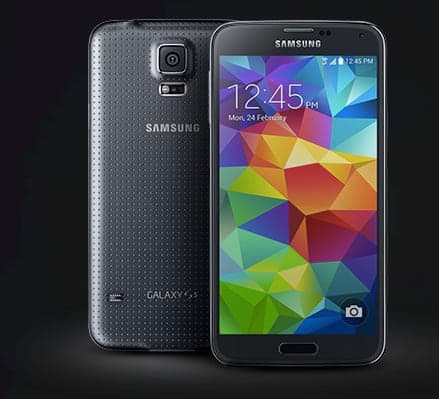 The Samsung Galaxy S5, the most anticipated device at Mobile World Congress (MWC) 2014, is finally here and now all of the rumors and leaks that we have read about over the past few months can be put to rest. It does not leap buildings in a single bound and it is not faster than a locomotive – in fact it is very much like the current Samsung Galaxy S4 – the smartphone that sold over 40 million devices – and Samsung expects big things from the new Galaxy S5.

Those that were hoping for an all-metal body are in for a disappointment, as Samsung has stuck to pretty much the same polycarbonate of the previous Galaxy S4 adding the faux leather type backing with a dimple effect.  There is no mistaking the new Galaxy S5 for anything but a Samsung device. The sides were improved and actually use a polycarbonate and glass fiber material to make it stronger and better looking.  It's also IP67-certified, which adds an element of water and dust resistance. Those hoping for the physical button to finally disappear, will also be disappointed – the physical button has worked for Samsung in the past and it continues on the new Galaxy S5, also acting as a fingerprint scanner, which works pretty well as long as you do not go too fast.

The Galaxy S5 has the conventional flat screen with a Super AMOLED display of 5.1-inches with a Full HD 1920×1080 resolution. It is sporting the Qualcomm Snapdragon 800 quad-core processor clocked at 2.5GHz with 2GB of RAM and 16GB or 32GB internal storage with a microSD slot for up to 64GB additional storage. The camera has been bumped up to 16MP with and a 2.1MP Front Facing Camera (FFC) for video chats and improved selfies and the processing rate has been cut down and they have added several nice software features as well.  The battery is a 2,800mAh, but with 20-percent more capacity.

The software has actually been toned down a bit with a lighter version of TouchWiz and not so many gimmicky features. Back by the camera flash is a heart rate sensor and works in conjunction with S-Health 3.0, which acts as a personal life coach and you simply press your finger on to get a reading. The Galaxy S5 also contains a pedometer and a food monitor. The Galaxy S5 also uses the new USB 3.0 charging and data transfer port with a cover over it to keep water out.

Price and availability have not yet been released, but we will keep you informed as soon as we find out.

Let us know on our Google+ Page if you will be standing in line to pick up your new Galaxy S5 – are you a Galaxy S3 user ready for an upgrade, a Galaxy S4 user that updates every year, or coming over from another manufacturer to give Samsung a try. We would love to know what you think of the Galaxy S5 – is it everything you were hoping for or did you expect more.