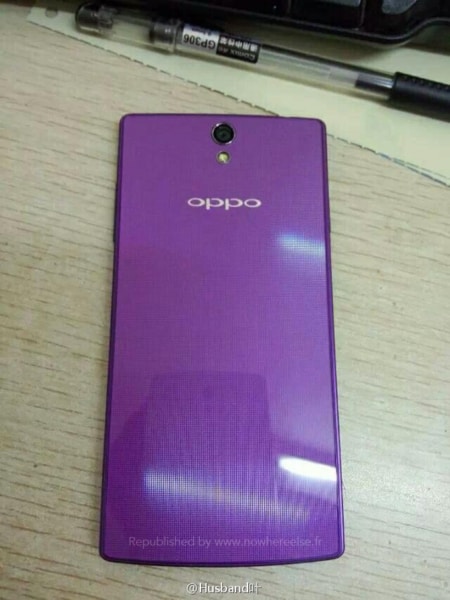 The era of absolutely crazy phone technology seems to be upon us.  People maybe jut three years ago would not have even been able to fathom what is being announced today.  For example, the upcoming Oppo Find 7, which is expected to be formally announced on March 19, will be a powerhouse of a phone.  It will be one of the few phones announced thus far that utilize a QHD 2,560 x 1,440 screen.  Oppo has also hinted that there will be a second variant of their new device, presumably for a lesser price.  Based on some newly revealed AnTuTu benchmarks, this idea has been seemingly confirmed.  The new benchmarks tell us that the first model will come with the famed QHD screen, as was expected, and the slightly newer MSM8974AC Snapdragon 800 processor that is clocked in at 2.45GHz.  The secondary model has a 1080p Full HD screen (1920 x 1080) and will be running on Qualcomm's slightly older MSM8974 Snapdragon 800, which clocks in at 2.26GHz.  Despite those changes, everything else between the phones is identical.  Both of them will have a 13MP primary camera with a secondary 5MP shooter, along with 16GB native internal storage, with a potential for expansion, however this is not confirmed.  They will also have 3GB of RAM each, and are expected to be running on Android 4.3 Jelly Bean upon release. 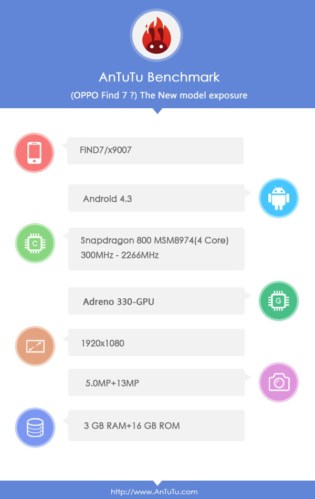 Based on the new leaked photo above, you can see that the Oppo Find 7 looks very similar to a typical Sony design, minus the curved bottom.  As is always, it is impossible to know if this photo is the actual phone or just a clever edit, but as the official announcement date is about a month away we will not have much longer to wait.  I wish that the phone was running Android 4.4 KitKat, especially considering that it has been out for some time now.  Otherwise, the only thing to note mentioning about these phones is that the only difference is in the screen and the processor, which is completely appropriate considering that the phone with the QHD screen will need more resources to handle all those pixels.  What do you think?  Are you looking forward to this new device?  Let us know down below in the comments!