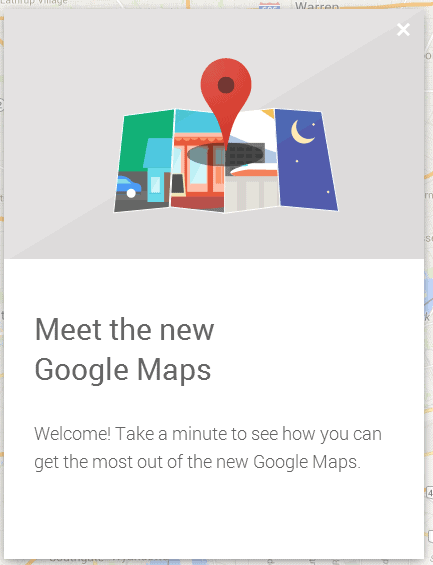 At Google I/O 2013, Google announced a new version of Google Maps which looks amazing. Speaking of Google I/O, why haven't we heard of any dates for this years' Google I/O? Anywho. The redesigned Google Maps had been in beta ever since last May, and now Google is leaving the "Preview Mode" label behind. The redesigned Google Maps is full-screen and looks just plain amazing. It is a bit slower than the older version of maps, but I really like the new version. It's been available on Mobile for quite a while and most of us have probably used it.

Google has released a new YouTube video, showcasing the new version of maps, which you can see down below. What's nice about the new version of Maps is that the search bar and directions box float on top of the map, as well as all the other tools in Google Maps.

For those of you that haven't checked out the new version of Google Maps, you'll want to check it out now. It's just plain beautiful. And now available to everyone. All your favorite features are still there. Including getting directions via air, train, public transportation and more. Which is pretty nice to have, especially if you're looking to take the train somewhere, or if you're using public transportation, you can see what times the buses are supposed to arrive, which is great to have on the go.

I've been using Google Maps Preview ever since Google I/O last May, and I love it. It's beautiful and it works very well. This is really the first big overhaul on Google Maps that I can remember, so it was definitely needed. It does seem to be a bit faster now that it's out of beta though, which is great.

How many of you are loving the new version of Google Maps?