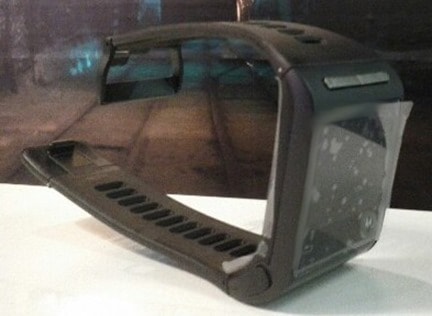 We've been hearing off and on lately that Google is working on a smartwatch. And well we have some more proof, thanks to Android Police, that Google is indeed working on one. This is a prototype that was supposedly made by Motorola last year for Google. We also heard during Motorola's event at Mobile World Congress just a little while ago, that Motorola will release their own smartwatch this year, and that they aim to address consumer issues like style and battery life.

Android Police is stressing that this is a prototype and not the final version of the hardware, obviously. They believe that this product was in existence in 2013. As you can see there is a rubberized band, a square display with a sizeable bottom bezel, a rocker up top and a button on the lower left corner there is a capacitive back button, which is opposite of the Motorola logo.

It's just a basic smartwatch right now with a few buttons. Although there's no camera like Samsung puts on their smartwatches. The codename for this one was Gem, which we may or may not see the final product of this device. It definitely looks a lot different than the concepts of the Google smartwatch we had been seeing and what we thought it'd look like.

I don't know about the rest of you, but if and when Google does show off their own smartwatch, I definitely want it to be running on Google Now, as I think that would make the watch much more usable on a daily basis. At this point, I don't have a huge need for a smartwatch, but if it were basically Google Now on my wrist, I'd definitely pick one up. How about the rest of you?