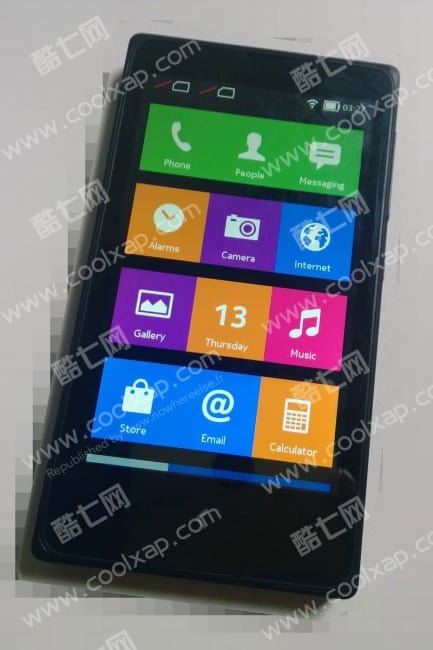 Mobile World Congress might only be a little less than a week away, but that hasn't stopped enterprising leakers from getting their hands on new material, which is hardly surprising at this point. We're unsurprised that even more images of the Nokia X have leaked out, but it would be nice for at least a little bit of a surprise for next week's big event. These images seem to have come from China and they show the Nokia X in a closer light, but still leave out some interesting details.

From these latest images, it's clear that this is very much a Nokia device, and from a distance you'd be unable to tell this apart from a similar-sized Nokia Lumia. No matter how much we want it to be though, the Nokia X is not the Android phone we were hoping the Finnish giant to make, instead it's a low-end affair that's all but set to join the company's Asha line aimed at emerging markets. The thick plastic and fairly bland design cues show this off in these photos just as much as the internal specs do.

Speaking of what's on the inside here, the Nokia X is said to feature a 4-inch 800 x 480 display, a dual-core Snapdragon CPU, 512MB of RAM, a 3 or 5-megapixel camera and not much else. Apparently, Android 4.4 KitKat is on board, but without Google services we're not sure how successful Nokia's efforts will be. Of course, compared to the rest of the Asha line the X should stand tall and offer potential customers a whole lot for their money. With pricing only having leaked out in Vietnam so far, it's hard to tell how much Nokia is going to be asking for this guy, but we doubt the Finnish giant will be charging too much for what is essentially an outdated device masquerading as a Windows Phone device.