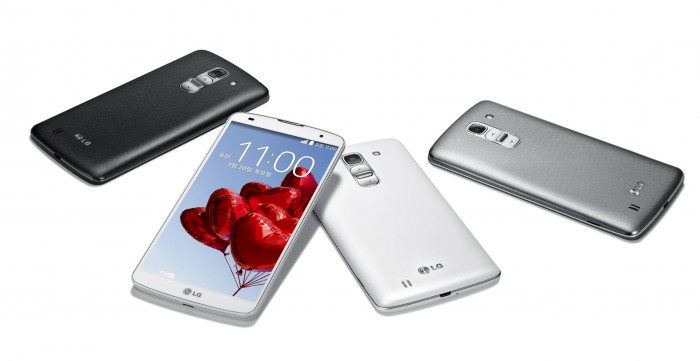 Yesterday, LG announced their latest large-screen device the G Pro 2 in Korea. While there's no official word on just when it's heading to the States, we're pretty sure that it'll be heading our way. Especially considering that LG is the company that launched the G Flex internationally. So, if you're looking for a large device, which high-end option do you pick? With so many options out there, it's hard to make the right decision. We're going to compare the new G Pro 2 to other high-end giants that are available right now. The Sony Xperia Z Ultra, Samsung's Galaxy Note 3 and the HTC One Max. Certainly, there are other big-screened options out there (which we'll cover a little) but, these are some of the best devices from top-tier manufacturers that are available right now. 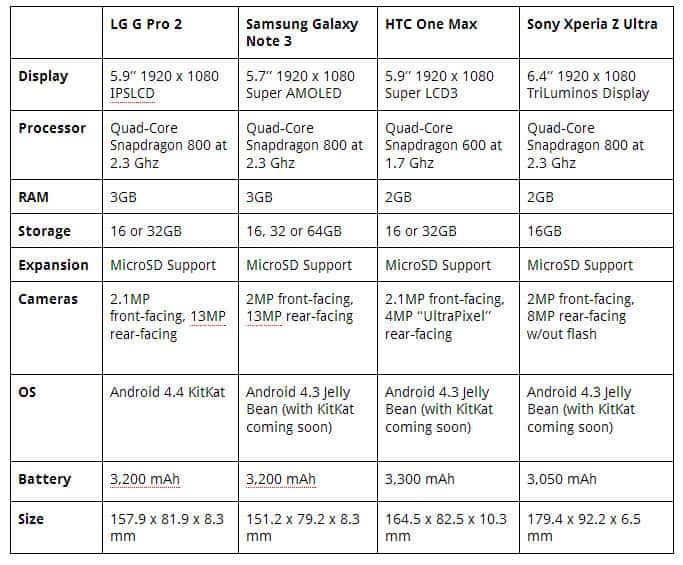 Above is a table of how these guys all shape up on paper. These days, specs have become less and less helpful, but stats do tell us quite a bit about a device and what it might be like to use. For instance, we can see that while having a bigger display than the Note 3, the G Pro 2 is only 6mm taller and the Xperia Z Ultra is the physically largest device, no doubt thanks to the 6.4-inch display. Everyone's rocking the same resolution here, but Samsung's display has the highest PPI by virtue of also being the smallest. It's the same story when it comes to battery sizes as well, with the One Max narrowly taking the top spot and Sony's giant Z Ultra lagging a little. The Snapdragon 800 is large and in charge here, expect for the One Max, which is using a Snapdragon 600. It might not make that much of a difference, but it certainly doesn't compare all that well on paper.

These aren't the only big Android devices from well-known manufacturers, although they're arguably the best. Oppo's N1 – if you can get your hands on it – is a decent option at 5.9-inches and features the same processor as the HTC One Max, with a little more oomph and a curvy nature is the LG G Flex which features the internals of a G2 in a 6-inch curve. If you're looking for a big device on a budget, you could do a lot worse than taking a look at the Galaxy Mega on AT&T, which doesn't win any awards for high-end specs, but it does have a similar software experience to that of a Galaxy S4 and isn't all that expensive.

Specs aren't the biggest thing here, but it is interesting to see how they stack up. What should make up your mind is not an extra 100 mAh of battery capacity, but more what it can do it for you. Both Sony and Samsung have a form of stylus input for their device, with the excellent S-Pen included in the Note, and the ability to use a pencil on the display of the Xperia Z Ultra. Neither the One Max nor the G Pro 2 can do that, but the One Max has excellent speakers which is perfect for consuming media on the move. LG's latest "pro" delivers on the specs, but doesn't really shake up the experience from other LG devices all that much, which is a shame however, the One Max doesn't try that hard either. Taking the fingerprint reader – which isn't all that useful to most people, anyway – and the One Max is essentially just bigger, that's it. These are all great devices and they all offer excellent experiences, with the specs being so close on paper though, it's a good idea to try them out for yourself if you're in the market for a big, shiney new Android phablet.