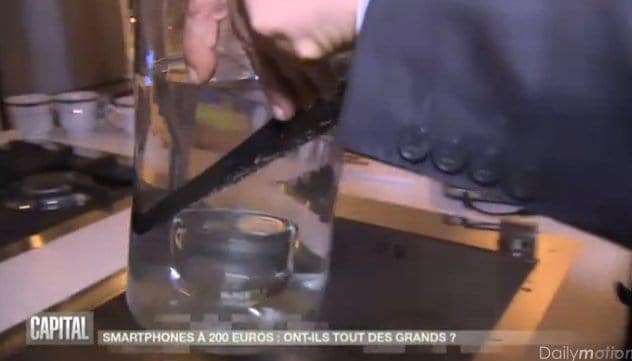 While Archos is hardly spoken of in the same regard as Motorola, Samsung, HTC or anyone else here in the US, they are something of a brand name in Europe. Especially in France, which is where the company originates from. What with Mobile World Congress being in neighboring Spain, it’s of no surprise that the company had some European devices to show off. One of which is a new smartphone the company is launching in conjunction with Quecha, a French brand that specializes in mountain biking accessories and such. Speaking to what looks like a French TV program, Archos’ CEO had something special to show off with the Quecha Phone 5. The device is said to be waterproof and rugged however, as our friends at Android Police have noticed, things didn’t quite go to plan…

The first test went just fine, there was no visible damage on the phone from a drop at waist height, but then the waterproof demonstration did not go so well for the Archos CEO. General consensus is that the device would have been fine in the container was already full of water, and that filling the container with the device inside it somehow affected the pressure and took its toll on the smartphone. This would make a lot of sense, after all these devices are designed to protect against ingress of water by being a near-completely sealed unit. However, we doubt a device from the likes of Archos is going to be able to withstand any sort of serious change in pressure.

No matter what the cause of damage, it’s a pretty funny incident, let’s be honest. These sort of things are bound to happen at press events, especially with upcoming devices that might not be 100% final in their design. These are the sort of moments that folks like Archos really don’t want us to see at all. Let’s just say Samsung had the right idea unveiling their new water-resistant Galaxy S5 on a dry stage.