The heads of Viber and Rakuten announced a deal today that will have the Japanese company, Rakuten, paying out $900 million for Viber's messaging app.  Viber allows free calls and text messaging from a mobile phone.  Rakuten, which also owns the Canadian e-reader Kobo, is hoping to expand its digital imprint into the emerging markets.  Rakuten's chief executive Hiroshi Mikitani is hoping that their users will use instant messaging to contact an online store to inquire about possibly placing an order.  He said:

"This acquisition is a totally new strategy that will take Rakuten to a different level.  Developing this messaging system on our own would have been impossible."

"This combination presents an amazing opportunity for Viber to enhance our rapid user growth in both existing and new markets.  Sharing similar aspirations with Rakuten, our vision is to be the world's number one communications platform, and our combination with Rakuten is an important step in that direction."

Rakuten has been buying up companies the past couple of years – Wuaki.tv, a European based video-on-demand (VOD) service in 2012, last year they grabbed Viki, a Singapore based online TV and film streaming service, and even bought an 'interest' in Pinterest.  With its development center still in Israel, Viber is big in the Middle East, as well as Russia, Australia, and the U.S. among its biggest markets, although in the Philippines and Vietnam it is established as a top-ten app.

With a price tag of close to $1 billion slapped on Viber, one has to think of what BlackBerry's BBM is worth.  While Viber has 300 million registered users, BBM continues to grow and is expected to hit 150 million registered users in 2014, as well as regional strengths that could possibly be even more attractive than Viber's.  Both have a key presence in Africa, however, in two key markets, BBM has 80-percent of the smartphone users.  BBM is the number one app in the prosperous South African market and number two in the growing Nigerian market.  BBM is the number four app in Indonesia and number thirty-seven in India, and BBM is hanging in the top 50 apps in the UK and Canada.

The number of users does not always equate to the value of an app – just like in real estate, it's location, location, location. BBM has some arguably better locations in key areas than Viber, but their $900 million price tag gives us a starting point for the valuation of other such messaging apps like BBM, Tango, Kik, and others. Viber has a large base of users in more predominantly poorer countries – Pakistan, Zimbabwe and Tanzani. The real value of an app is how often is it really used, the monthly average users (MAU) and the purchasing power of that group – none of which is available to the public. BlackBerry's BBM may be well on its way to the $1 billion mark. 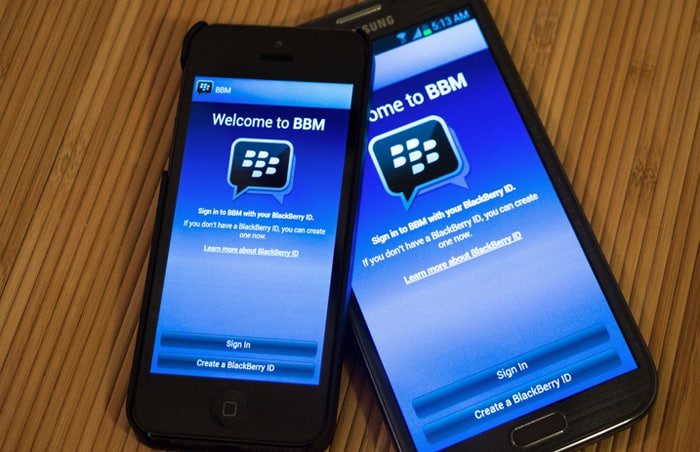