By now, we know the score with Intel, they want to break into the mobile market, but it just seems like nobody really wants them here. Which is a real shame, as their chips deliver some very decent performance, indeed. Since Intel burst onto the scene with chips that were finally ready for smartphones a few years ago, Intel has changed their strategy a little bit. The processor giant has decided to focus their efforts on more emerging markets as well as tablets. Both of which are good moves for Intel. Names like "Snapdragon", "Exynos" and "Tegra" have become names in the mobile industry, obviously some more than others. Still though, the average consumer doesn't often care that much, as long as "it has a Snapdragon in it". Intel is still a name we associate with laptops and desktops. Hopefully, Intel's latest round of chips, which are set for an MWC reveal can turn things around.

According to a leaked roadmap that VR-Zone have gotten their hands on, we can expect a pair of refreshes on the mobile front at this year's Mobile World Congress. On the smartphone side of things, it looks like Intel is going to be refreshing their Bay Trail line of CPUs and for tablets, there's word that new 64-bit Atom CPUs will be announced. In tablets, Samsung launched the Galaxy Tab 3 10.1 last year with Intel Inside and the performance difference was barely noticeable compared to ARM-based chips and the Galaxy Tab 3 10.1 became a surprisingly snappy device, despite the rest of its shortcomings.

No matter whether or not Intel do announce new chips at this year's Mobile World Congress will be somewhat irrelevant if they don't announce new partners as well. It's great that people like Samsung are on board, but we're talking about one tablet here. Intel needs to get more major manufacturers on side if they hope to continue growth into the mobile sector. Focusing on emerging markets and tablets is great, only if you can find people willing to use your chips. 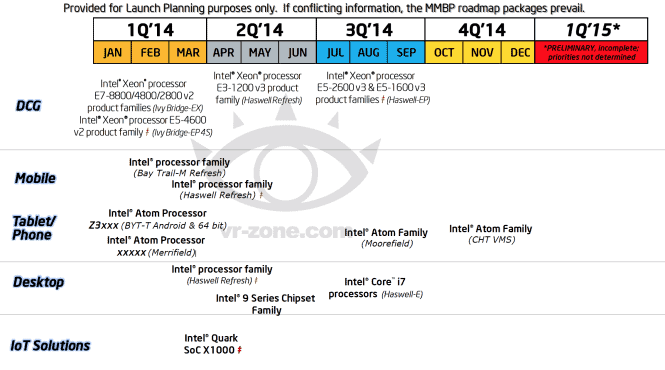