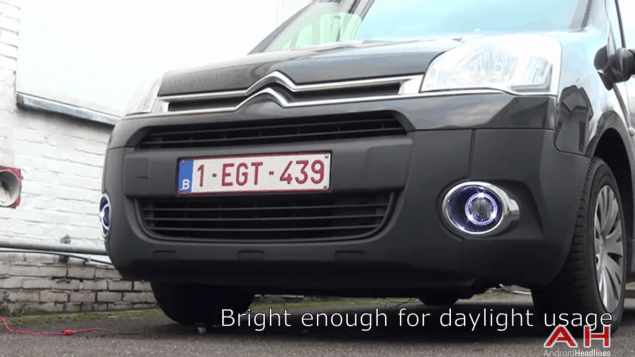 If you fancy a little customization on your vehicle, a recent indiegogo campaign for a little project called Rollin' Eyes wants to give your car(or truck, van, etc.) that extra bit of flare with their highly customizable set of LED lights. The LED's are linked to your Android device by bluetooth, and then controlled and customized all from your android device so you can change things up to fit the situation. The Rollin' Eyes let you customize the color of the lights to fit the surrounding, so if it's day time you can have the front LED ligts turn white for day time just like normal headlamps, and the rear ones turn red to match the breaks. This is also the best setting for if you're driving at all, whether day or night, and when you're parked the lights can be switched to fit one of tons of different settings from what Rollin' Eyes calls "show mode". You obviously wouldn't want to turn any of the Show Mode settings on while you're in transit as it's pretty distracting to other drivers on the road, and if caught you would more than likely get a nice hefty fine depending on your states local laws regarding the matter.

If you're interested in grabbing a set of the Rollin' Eyes for yourself, you can start by putting down a set amount on the indiegogo page, and then you can grab the Rollin' Eyes LED's in either a strip or a circle, or both. The best thing about these lights is that they're made to stand up to the elements as well as withstand some abuse. The Rollin' Eyes are shock resistant and waterproof, so if you live in a rainy state, your LED's are safe from moisture damage, and should you end up in a tiny fender bender the lights should come out of it just fine. The customization part of the lights can actually get quite complex, as you can insert a wide range of steps into how the LED's blink and react. So if you wanted them to flash red and blue you can do that, and have the lights transition into blinking in one of the many different style and color combinations thereafter. It's actually pretty cool.

The indiegogo campaign is still funding, and has a little over a month left if you wanted to help out. There's plenty of time to get your money in as a backer, and the Rollin' Eyes are supposedly getting delivered to backers sometime in March, although there was no word on a specific day.