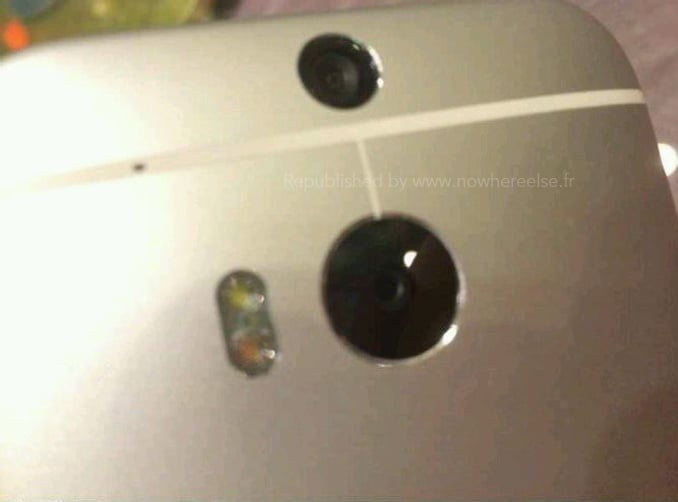 Good things come in pairs and it seems that HTC is following this trend pretty heavily with the HTC M8. New Image leaks seem to show the successor to the HTC One will have a dual lens camera paired with the a Dual-LED flash on the back. We've heard of the rumors about the new flagship device from HTC sporting a dual-camera, and we've even seen some leaks of it, and the Dual-LED flash is nothing new but it's a nice thing to see when sitting next to a dual lens camera. We've heard all the specs rumors and leaks over the past couple months, and just a couple days ago we saw what Blink feed would look like on the new M8 with the new version of sense, thanks to the screenshot from @evleaks. These newest image leaks come from nowhereelse, and while this isn't the first image we've seen displaying the two camera lenses, more leaks always add just a little more fuel to the fire when it comes to speculations. We're closing in on the supposed end of March launch date, so as we're approaching the release of HTC's new phone, we surely have plenty to discuss over what to expect.

Other rumors include the use of a fingerprint scanner on this new device, although we have yet to see anything supporting this theory in the form of a photo. However we have seen some leaked shots of the front of the display that show off the new phone's on screen buttons. The depictions of the phone with the lack of physical navigation buttons this time around would be a welcome change to plenty of HTC fans out there should it be true, and we know Google must be happy about HTC's decision to follow the design guidelines more closely. Implementing this type of button interface opens up the display to have more screen real estate, which in turn gives the user more screen to work with for apps, docks, etc. So if what we see in these photos is what we will get when the phone launches, the M8 will have two cameras for you to work with when taking snapshots, the thing that remains a mystery still is how both cameras will work together exactly. HTC is going with it's Ultrapixel setup with the new device just like with the M7, so the logical explanation would be that the second camera will support the quality of the photos taken from the first.