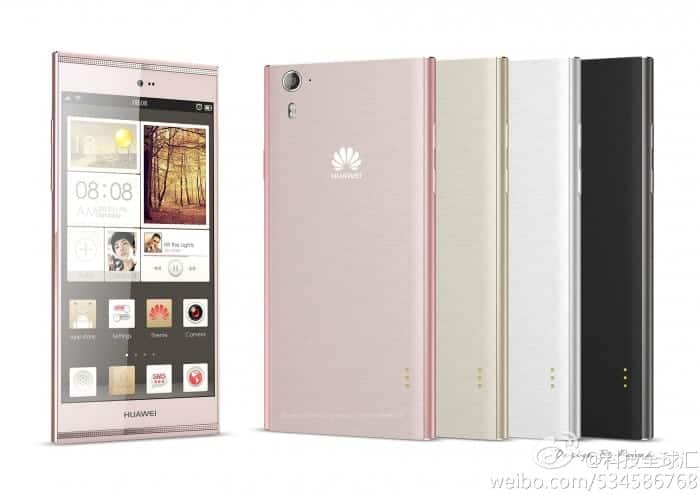 Huawei apparently have a few devices that they're fairly proud of launching at this year's Mobile World Congress. In fact, they even got Siri to lend them a helping hand in creating some buzz. It seems that Siri however, has been brushed aside in place of a leaked press render. It's widely considered that the smartphone Huawei have been teasing for Mobile World Congress is going to be the Ascend P7, the follow-up to last year's Ascend P6 that put good looks ahead of specs and battery life. It looks like this year's Ascend P device is going to be taking the same approach, too. The Ascend P line is all about fashion and style for Huawei and as you can see in the leaked render above, the Ascend P7 is looking good.

With four colors on show, the gold, pink, black and white Ascend P7s all look remarkably thin and it seems as if the display has seen a size bump as well. According to rumors, the Ascend P7 is going to be shipping with a 5-inch or 5.5-inch 1080p display. Which would certainly be an upgrade from the 4.7-inch 720p panel used in last year's device. As well as that, a dual-LED flash can be seen around the back of the device and we can see that Huawei has once again decided to go with onscreen buttons. Leaking onto China's Sina Weibo social network has become a common thing for upcoming devices and while we're not quite so sure this is the real deal, we'll soon find out as Mobile World Congress is less than a week away now and there's going to be a lot of news coming.

We'll have the latest concerning Huawei's new devices next week when Mobile World Congress gets started in earnest. From the Chinese giant, we're looking forward to seeing a pair of Android tablets and the Ascend P7 that we see before us.