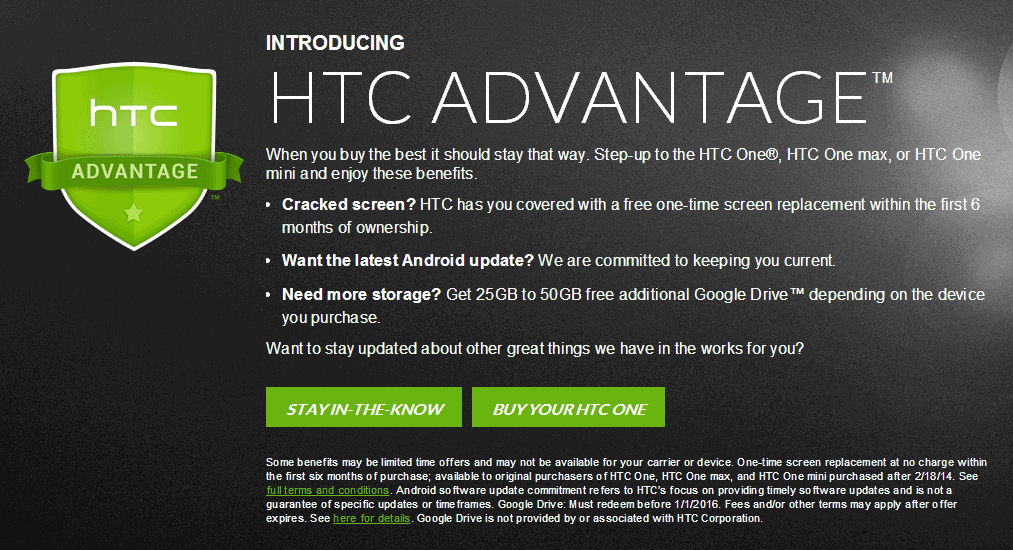 This morning, HTC has been trying to steal the spotlight from everyone else. They announced an event for March 25th, which we're expecting them to announce the successor to the HTC One. Even though they are kind of late this year. And now they have announced the "Advantage" program, that is going to be free to all HTC One, One Max, and One Mini users. It's kind of like having insurance on your device, except it's free, and obviously will have time limitations.

The "Advantage" program does a lot more than just fixing screens, however. It will also include their "Commitment to Android updates for two years", along with free cloud storage, HTC's backup service and "hands-on" help. The Hands-on help might be similar to what Amazon has done with Mayday.

Now as far as replacing your cracked screen, HTC will only replace it within the first 6 months of ownership on your new device. To have HTC fix it, all you'll have to do is call support to see if you are eligible and ship the device to them. You'll be able to ship it using free ground shipping, however you will be without your phone for 8-10 days. However, you can do overnight shipping which will cost you $29. And you'll get your phone back much faster.

It sounds like a great program, I'm just hoping HTC opens it up to their 2014 flagships. Because at this point anyone that bought the HTC One at launch, is well past the 6 months for getting their screen fixed. Otherwise, it sounds like a great program, and if it's done right. It could really help bring in more customers to HTC's side. As usually getting a display replaced costs around $100. But with this program, the most you'd pay is $29, and that's to get your phone back in a jiffy.

How many of you are interested in the "Advantage" Program from HTC?