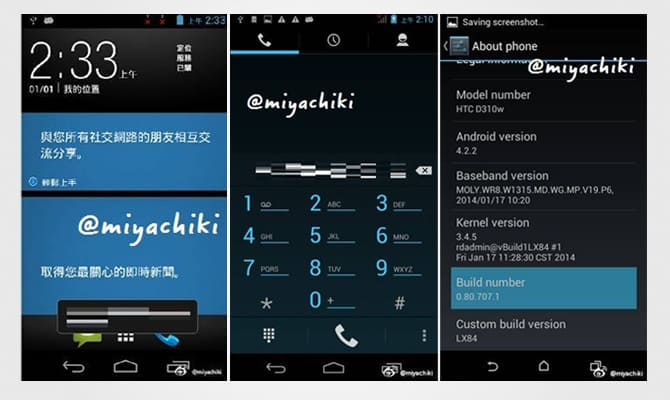 HTC has had a device leaked on their website recently, and no it's not the HTC M8, instead, it's an addition to the Desire line. The Desire 310, is a new device with no known release date, but since the device was leaked on the official HTC website, we do know specs. One of the specs is the use of a MediaTek processor, which may be the key to the newest leaks. Posted by miyachiki, screenshots of the Desire, show a stock Android experience, with Blinkfeed laid on top.

This is a somewhat different approach for HTC to take, especially if it is true. Usually, all HTC devices have the Sense UI, so if the new Desire has a stock Android experience, the question would be why?

Well, we know that Nexus devices always have stock Android experiences, and many people love them for that reason. We also saw the Motorola took a similar path, after Google took the wheel, and gave us a very close experience to stock Android. So to think HTC may do similar, may not be that far-fetched. Especially since the new Desire has low-end specs, it is possible that the device can't really handle, a Sense UI on top of Android 4.2.2, which is the Android version the device will launch with.

The MediaTek processor inside, is not the norm for HTC, usually we see SnapDragon, so that may be the biggest reason behind the stock Android experience, though nothing is for sure until launch day. However, if this turns out to be true, than it is possible that HTC will continue to use MediaTek in their low-end and possibly mid-range devices. Which could lead to stock Android on all of those future devices. The other biggest thing to look at, is where the device is being manufactured, because it is not all HTC.

That's right, a bit of a shock for many, but HTC may be using Compal Comm, which is a Taiwanese original design manufacturer. Since that is the case, we may be looking at the worlds cheapest HTC device ever, brand new of course.

The screenshots, also show us that the Desire 310 will have on-screen buttons, instead of capacitive ones. Much like the HTC M8 is rumored to have, which only gives way to more rumors, as if this article hasn't had enough. It is possible that HTC may be working on two UI's and it may be possible that HTC could use similar traits on the new HTC M8. Though, this is a far stretch to assume, since many expect to see the new Sense version on the HTC M8, or what we believe is the HTC One 2.

What are your thoughts on all of this? There is a lot to take in, and to come to your own conclusions, but going along with the screenshots. What do you think of a more stock Android experience on an HTC device? What do you think this could mean for the future devices coming from the company?