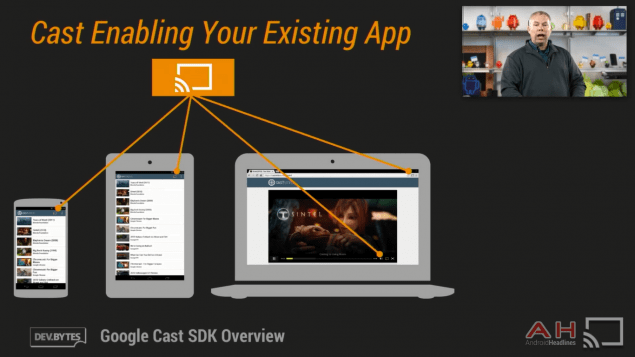 The Chromecast SDK went live earlier this morning, which we've been hearing about happening for a couple months, and now Google Play Services has just been updated to version 4.2 as stated in the blog post from Google, which adds in support for the Google Cast SDK to open up the ability for developers to publish Google Cast-ready apps. After the update is done rolling out to everyone, developers will be able to download the SDK from the SDK manager and begin work to make their apps compatible for use with the Chromecast. The Google Cast Software Development Kit is the technology behind the Chromecast, which allows users to cast their favorite media content to bigger displays and TVs. As the Google Cast SDK is now live and Google Play Services is now being updated, it won't be long before we start to see some new apps pop up with Chromecast support. Hopefully sooner than later.

For the developers, Google is stating that the Google Cast SDK is super simple to use, with no need to develop a brand new app to get the support. All you apparently have to do is incorporate the Google Cast SDK into your already existing applications, to make them compatible for use with the Chromecast, and allow for your users to bring even more content to the big screen for a new way to enjoy the apps they already use. The use of the SDK isn't just limited to Android though, it's also available for use with the Google Cast Chrome browser extension as well as iOS. So that means we'll see compatibility with web apps to Chromecast soon too.

Options for displaying content on Chromecast is varied, allowing you as the developer, to choose options for a receiver like a default media player for playback of certain HTML5 content, or you can use CSS to customize it with your own flare. You can even further customize the design with web technologies and make your own custom receiver, allowing you to build just about any application with included support for multiple protocols from MPEG-DASH to HLS. This is great news for Developers as well as users of the Chromecast device, as this will open up tons more compatibility with various apps across multiple platforms. We could soon start to see things like social media and games get incorporated with Chromecast support,(although we have no idea if that will happen it's just a hope) which would make use of some of these apps on a bigger display a whole lot easier.