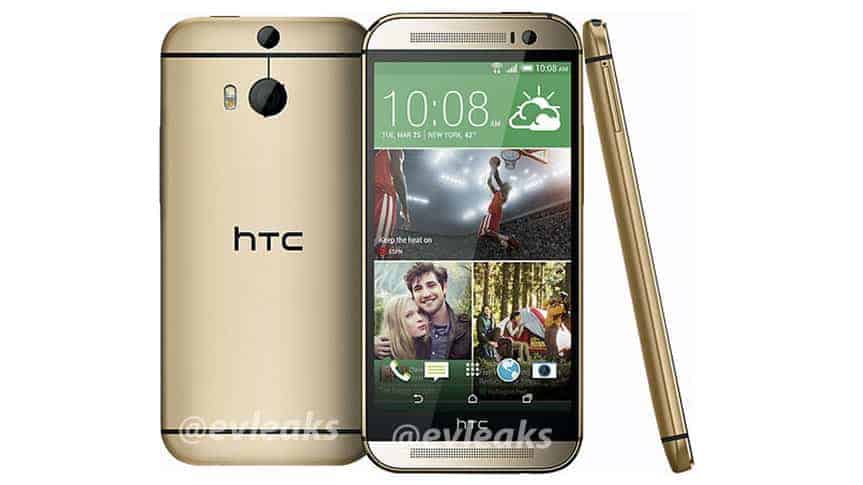 We've seen the HTC One, or the All New HTC One as it could be called, leak out a number times already this year but, this might be the closest look we get before its launch. @evleaks has once again gotten a close look at this year's HTC flagship, in gold no less. The leaked render looks to be the real deal, with the same sort of look on the device's display that we've seen before in leaked Sense 6 screenshots. As well as that, we can see that the device itself has taken on a more rounded sort of look. Eschewing what little bulk was left on the original HTC One.

In this gold version of the device, we can see that the BoomSound speakers, BlinkFeed and the black lines that are present on the Red version of the HTC One are all still present. However, there are some key changes to be seen around the back of the device where the camera is housed. There looks to be a dual-LED flash and what we believe to be a second camera. Of course, we could be wrong but we doubt a fingerprint sensor would be so far up the device and we'd also like to think that HTC's designers wouldn't create a render with a camera gleam effect on a fingerprint reader.

With HTC having scheduled their event for March 25th, we have a little over a month to wait for the latest and greatest HTC device to launch. So far, it looks like we're in store for more of the same this year with the "All New" HTC One, but such a strategy has worked for Samsung this year and has been working for Apple for the better part of a decade now. A revamped version of a great smartphone isn't a bad idea and if HTC invest in marketing this year, they could hope to sell more units than ever before.