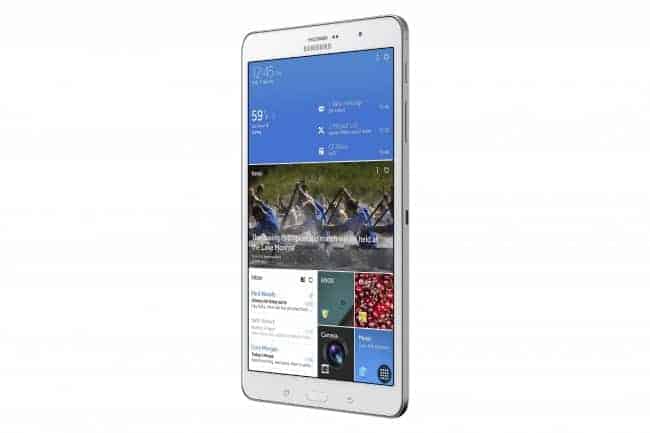 When Samsung announced their lineup of Galaxy Tab Pro tablets, we had a feeling that they weren't going to be cheap. Of course, with all of the features and horsepower that these devices are packing, we can't point the finger too much at Samsung. The 8.4-inch Galaxy Tab Pro, which is perhaps the unsung hero of the bunch, is finally going up for pre-order across the pond in the UK. Unsurprisingly though, we're not looking at Nexus 7 pricing here, and it's going to cost £349 for the Galaxy Tab Pro 8.4. That sounds pretty steep, and for an 8.4-inch tablet we suppose it is. However, the device does feature a 2560 x 1600 display resolution and is packed with specs.

Those specs include the Quad-Core Snapdragon 800 at 2.3 Ghz, 2GB of RAM, 8-megapixel rear-facing camera with flash and a 2-megapixel shooter round the front. Android 4.4 KitKat is included out of the box here and with a 4,800 mAh battery, this guy should last the distance. For £349 you'll be getting 16GB of storage, which is expandable via the microSD card slot. How does Samsung's pricing shape up to the competition? Well, not all that brilliantly, but we suppose that depends on your outlook. The G Pad 8.3 which we recently reviewed can be had in the UK for just £200 from Expansys, which gets you a Snapdragon 600, 2GB of RAM and a 1920 x 1200 8.3-inch display. The Galaxy Tab Pro here gets you a much better display resolution and a faster CPU for an extra £150 almost, which is a big bump. Of course, the Nexus 7 is available in the UK for £199 at its full price from the Play Store. So really, Samsung isn't charging too much of a premium here.

The Galaxy Tab Pro 8.4 is available to pre-order from Very and Clove, and is said to be shipping around March 21st, so there's still a fair wait even if you take the plunge right now. If you've been holding out for the Galaxy Tab 8.4 let us know how you feel about the pricing in the comments below and over on Google+!