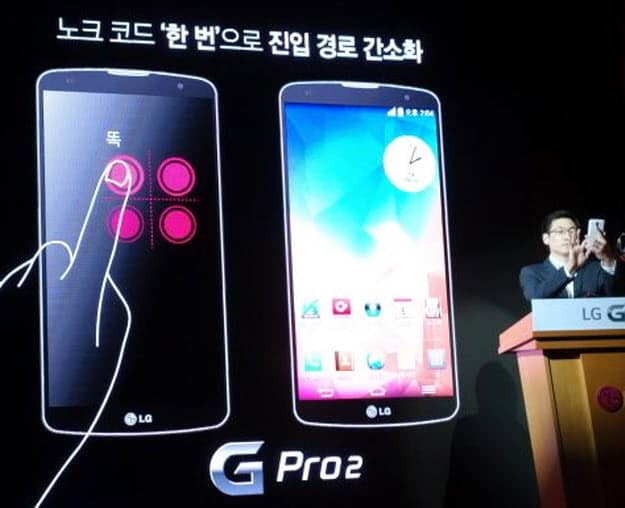 LG's newest Phablet is set to debut at the Mobile World Congress (MWC) later this month and will be available in Korea by the end of the month and hopefully in the U.S. in April.   The LG G Pro 2 certainly has the high-end hardware to compete in a soon-to-be crowded crop of new flagships arriving this year.  The G Pro 2 will have a 5.9-inch 1920×1080 pixel resolution IPS display, Qualcomm Snapdragon running at 2.26GHz, Qualcomm Adreno 330 Graphics Chip, 3GB of RAM, 16GB or 32GB Internal Storage, 13MP Camera and 2MP Front Facing Camera (FFC), and a 1-watt Sound System that LG claims will be 30-percent louder than the earlier LG Pro, and a whopping 3200mAh Removable Battery with Android 4.4 KitKat out of the box.

One of the most exciting features is the new Knock Code feature that will allow the users to unlock their G Pro 2 with a particular pattern of taps (or knocks) on the display.  This is an update to its earlier KnockOn technology used on their LG G2 device to wake-up the device.  Manufacturers have tried many ways of authenticating the user on their smartphones, such as pin codes or using a fingerprint scanner. According to ZDNet, LG believes their solution is the easiest and most secure and even boosted that it is easier and safer to use that Apple's fingerprint-recognition technology. Kim Jong Hoon, head of product planning at LG's mobile division explained:

"Compared to our competitors' fingerprint or eye recognition technologies, the Knock Code is safer and comfortable to use."

While it is true that some European hackers were able to by-pass Apple's Touch ID security, it seems that is a bold assumption from LG that their Knock Code method cannot be hacked just as easily. LG thinks their Knock Code is the perfect solution for both turning on and unlocking the device and stated:

"Thanks to LG's intelligent algorithm and advanced hardware, the knock pattern can be entered on any area of the screen — whether the display is turned on or off — using anywhere from two to eight taps."

For instance, if you divide the screen into quadrants and number them 1-4, you would touch or 'knock' the screen in that order to either turn on the screen or to unlock it.  LG claims it with half the effort of turning on the screen by having to use a physical button and then using your finger or typing in a code.  If you set your password at 1, 2, 3, or 4 – knocking on the quadrants in that order will open your device.  LG says that you can set passwords from 2-8 digits which will give you up to 8,367 groups of numbers.

It will not be long until we have some hands-on with the G Pro 2 for some real comparisons. Please let us know on our Google+ Page if you are anxious for the new LG G Pro 2 to hit the streets for sale. 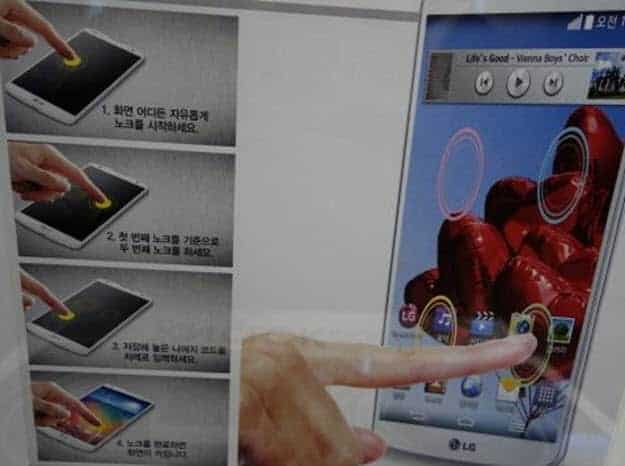