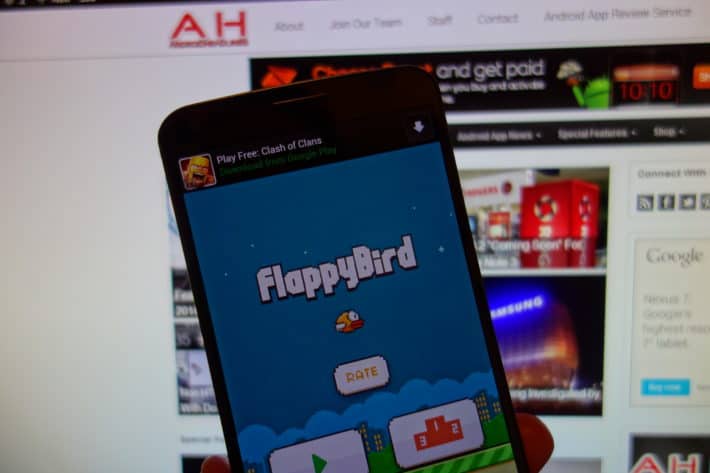 Well today marks the last day of Flappy Bird existence in the Play Store and iOS App Stores. The developer, Dong Nguyen says that he "cannot take this anymore". Which it's not due to legal reasons, which is what we all had first thought. He will be talking it down in about 20 hours, noon EST tomorrow. Nguyen explained on his Twitter account why he was taking down the game, more or less.

Flappy Bird has been very popular, especially once it hit Android. In fact, we heard earlier this week that the developer was making around $50,000 per day from Ads on the game. Which is pretty amazing when you think about it, because it's a simple little game. Which makes the fact that he's taking it down even more bizarre. We're guessing that this indie developer didn't want to have this much of a spotlight on him, and feels he's under too much pressure. It appears that Nguyen doesn't really like the game, he actually said he hates it now. But at least he's nice enough to leave it available for about another 20 hours and let everyone continue playing it this weekend.

Flappy Bird was one of those games which so many people got addicted too, and many of us still don't know why. It looks kind of like a rip off of Mario from Nintendo back in the day. Along with an 8-bit version of a game, which I know I don't like playing, I don't know about the rest of you. But according to Dong Nguyen, he's not selling Flappy Bird, and he is still making games. He capped off his cryptic tweets by saying "I can call Flappy Bird a success of mine. But it also ruins my simple life. So now I hate it".

How many of you out there were addicted to Flappy Bird? Are you saddened that it's going away? Let us know in the comments below.