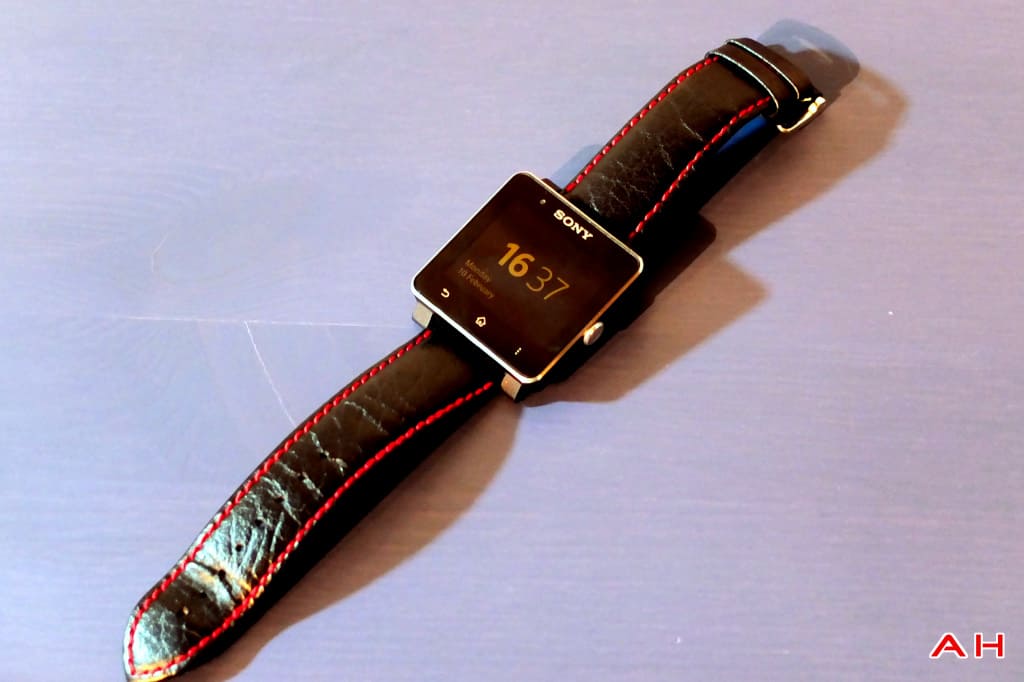 How something looks is of course, a very subject affair, but I personally feel that Sony has done a good job here. This could be that I’m watch wearer anyway, but Sony’s affair isn’t garish or offensive at all. With a boxy look that’s certainly digital in its attitude, it’s a thin watch and isn’t all that heavy, or certainly doesn’t feel as such on my wrist. Sony’s Smartwatch is also easily adjusted to your taste, too. Thanks to the standard 24mm wristband fitting, you can choose whatever you like. With Sony selling some very nice leather bands. I opted for a black with red stitch affair. If I were to liken Sony’s take on the smartwatch to any other watch, I would say it reminds me a lot of the Braun BN0046, which is a fair complement.

The steel casing of the SmartWatch 2 feels sturdy and it’s held up well over a month or so of use. The only gripes with the casing I have is the Sony logo and silver bezel, both of which can be distracting, but this is a matter of personal taste. The watch is water-resistant with a rating of IP57 and that means you can easily wash your hands with your watch still on and not have to worry about it. The Pebble and the Pebble Steel both laugh in the face of water, but Samsung’s Galaxy Gear just can’t take it. As this is a watch you’re supposed to read messages on and interact with, it needs to have a good display. Sony have done very well here, with the SmartWatch 2. The display isn’t particularly high-resolution, which can limit how much you get on the display – no less than its physical size of 1.6-inches though – messages were easy enough to read however, and touch targets not all that difficult to hit. It’s a transflective display, which gives you a display that’s always on to tell the time, reflecting light back off of it. There’s a light inside the watch that makes things nice and bright. Colors are a little washed out, but at least this is a color screen unlike the Pebble’s. It can’t hold a candle to the Galaxy Gear though, but then again this is physically smaller.

There’s definitely room for improvement here, but as small screens strapped to your wrist go, Sony have done a good job here and I had no complaints when using it in either bright sunlight or indoors.

One of the main reasons anyone wants to own a smartwatch is to get notifications on their wrist. This seems trivial, but I’ll tell you right now since I got my smartwatch I’ve found dealing with notifications much easier. When a notification comes through, your wrist with vibrate and the screen will light up for a few seconds, giving you enough time to read a message. Sony makes a good effort here and overall, the experience is pleasant, but there are some cracks throughout.

First up are the official “extensions” from Sony to get certain notifications to your device. These cover GMail, Facebook, Twitter and SMS messages and phone call handling.. SMS messages work really quite well however, there’s no threaded messaging, but then again this is a watch. The GMail extension is very good again, and I’ve had no issues on stock Android 4.4 using a Nexus 5. If an email is all text, you can practically read it on your wrist, as well as having it open on your phone with a few taps, too. Twitter on the other hand is a different affairs and I failed entirely to get the Twitter extension to work. SMS is pretty decent as well (KitKat users should try 8SMS to get this working).

Otherwise though, you’ll need to download your own third-party notification app to deal with everything else. This sounds messy, and at first it is. However, with apps like Watchify, Watchnotifier and others you can easily get whatever you want pumped to your wrist. These mostly rely on Android 4.3 and the new notification listener service. So, those on older versions of Android might struggle a little. It’s a shame that these sort of apps need to exist, but through using them I can get BBC News alerts to my wrist, Google+ notifications and more, however they’re mostly useless without looking at my phone.

Sony have done some great work when it comes to notifications, but it’s still not good enough. With third-party apps stepping in to fill the gaps, Sony should be adopting the same sort of attitude and sending all notifications to the watch, or at least a way to do so. This is easily achieved with Android 4.3, but since Sony has Android 4.3 on only a handful of devices, it doesn’t look like they’re going to be looking into the Notification Listener Service for a while yet. 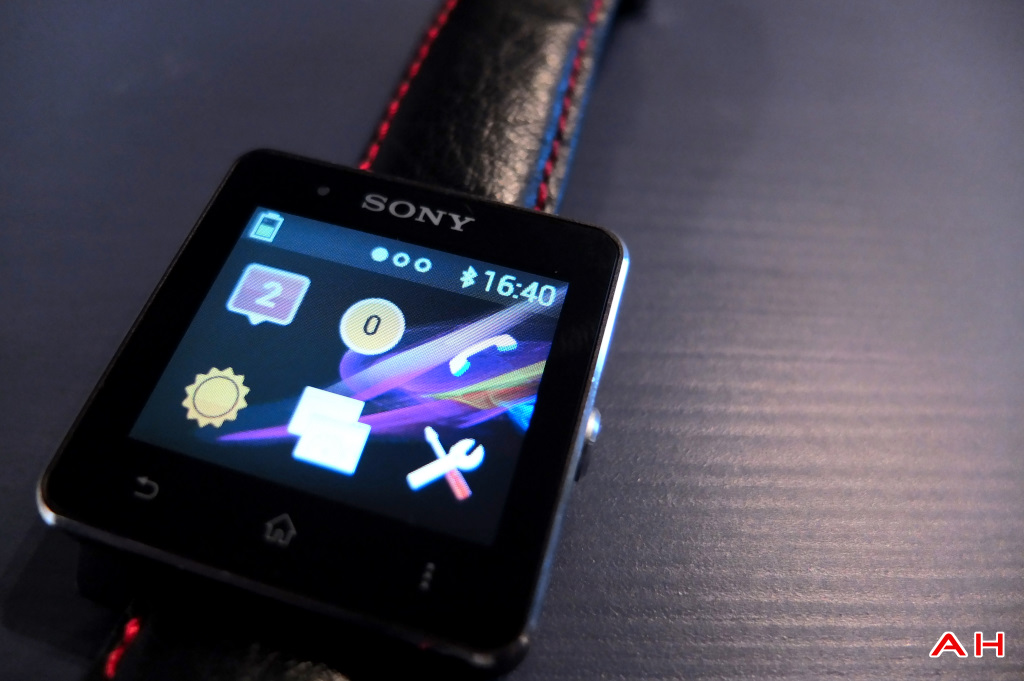 With Pebble launching their own app store, it’s clear that utilities are becoming essential for the smartwatch experience. Sony sort of has the right idea here, and thanks to the SDK access they provide to developers, there are good apps out there. However, Sony’s way of doing things stumbles out of the gate.

First of all, getting apps on to the device is troublesome. Much like setting up the watch in the first place, you need to go through Sony’s Smart Connect app in order to adjust settings on the SmartWatch 2. You can find what Sony calls “extensions” in the Play Store. However, you won’t find these apps in your app drawer, instead they’re found in the Smart Connect app, which is easily accessed from a quick pull down of your notification drawer. That’s fine and all, but finding apps is a real chore, as there’s no central place to find these apps or utilities and the recommended apps from Sony are all either their own or pretty obvious choices.

Watchfaces are, with the SmartWatch 2, few and far between. With a poor selection on the watch, and an annoying process in order to get third-party faces, Sony need to fix this. We assume that there’s only so much space on the watch for so many faces, but they could at least give better support to developers willing to again fill the gaps. Third-party watch faces are treated like intruders and tarnish the overall experience, through no fault of their creators. There are some good third-party options out there, but they come with compromises, like the omission of full-screen notifications when something comes through. 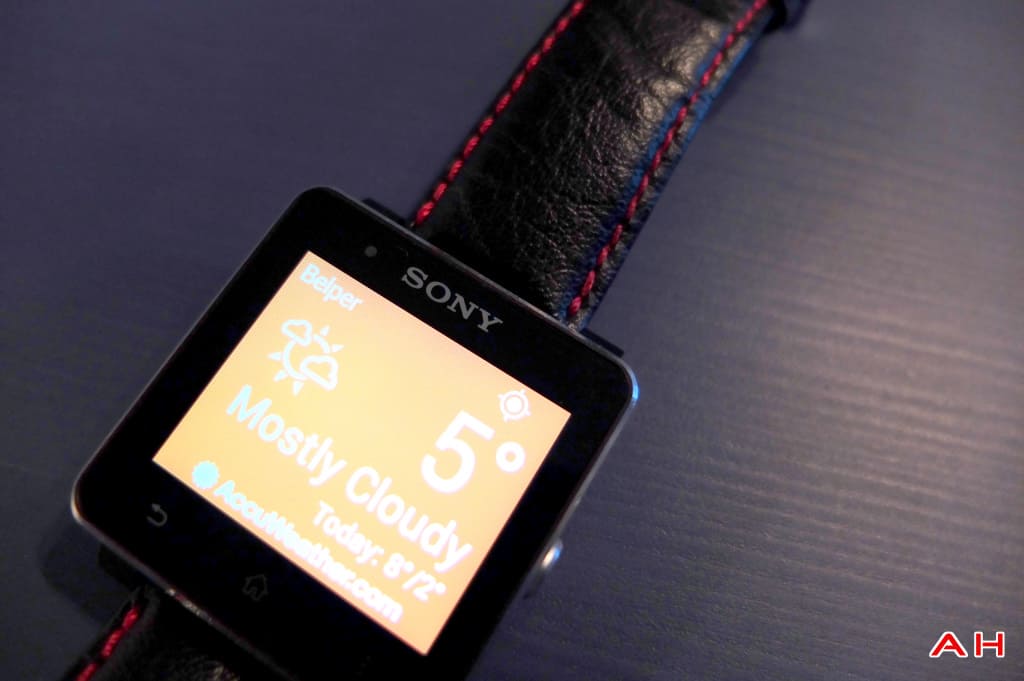 Still, I’m happy to report that the overall selection is quite good, when talking about a small device like this. The apps I have on my watch range from a Yelp app, to a crude scoreboard app I use when playing pool. There are calculators, calendars and more to be found on the Play Store. Not a lot of them are free, but some of them are really quite good, indeed. Acceessing apps on your watch feels like a traditional Android launcher and it’s easy to recognize icon-to-icon. Apps like AccuWeather will put the weather on your wrist, but my all-time favorite app is Remote Widget which we covered earlier this year, as it puts any widget on your smartwatch.

What good is a smartwatch if it’s no fun to use? That’s a question that I’ve been asking myself for a long time now. Sony’s latest effort here is a mixed bag when it comes to performance. At times, I would find apps on my watch open quickly and give me the info I wanted quickly, at others I would see the familiar loading animation for nothing to actually happen. Over the course of a month or so, I feel like the watch has done what I wanted more often than not, but Sony have some work to do here. The watch isn’t slow by any means, and I would suggest that it’s quicker than the Pebble or at least as quick. Still though, it’s perfectly quick enough to check messages on, interact simply with your phone and more. So I have very little to complain about here.

I have however, come across some niggling issues with the watch. Such as pretty poor Bluetooth reception – which could be a Nexus 5 issue – and strange behavior in which the app will freeze and then restart itself. These issues have happened less times than I have fingers, but they’re no less annoying.

All-in-all, when talking about the SmartWatch 2’s performance, I’d say it was more than good enough and someone like myself who is iterated by waiting times didn’t have too much to complain about.

The big question concerning a smartwatch, how long will it last? Usage is going to vary as with everything concerning battery life, however Sony again do a decent job here. Most of the time. I say most of the time because the battery is a little schizophrenic. On one charge I would get 3 days out of it, no problem. Another, I would see the 15% warning just 2 days later. It’s not an issue, but having to charge your watch every other day or so might get annoying. Still, depending on how you use it, the SmartWatch 2 fits into your routine nicely. I found that using the display and touchscreen would severely impact the battery life. If you’re looking to use a lot of apps on the go away from a charger, be sure to bring a portable battery is all I would say. Using it for notifications – and turning it off at night – will get you pretty good battery life. 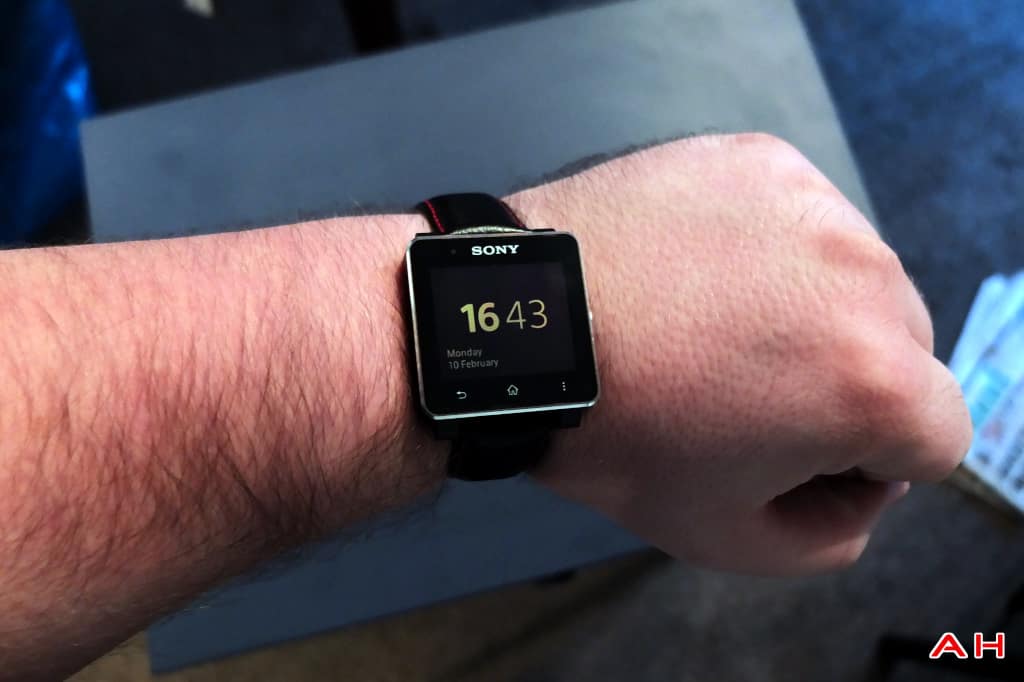 Sony’s SmartWatch 2 is a very good smartwatch, and I would say it’s something of an unsung hero when it comes to wearable tech and Android. It’s compatible with anything running Android 4.0.4 and above and it ticks a lot of the right boxes. However, it’s a hero with a tatty cape.

Setting up the watch in the first place is far more convoluted than it needs to be and Sony desperately need to organize apps for the watch. If not for the watch’s image, but for developers helping them fill in the gaps. Notifications are good, but there are a lot of cracking showing. Performance is decent, again though there are some issues, which niggles that should really have been fixed by now.

Firmware updates could more than likely fix or improve parts of the experience, but ultimately the hardware seems a little limited. Sony’s latest attempt at a smartwatch is definitely their best, and it’s definitely an easy recommendation to those looking for a smartwatch, especially those not looking at the Pebble or without a Samsung device. I’m going to keep on wearing mine, but I’ll be looking forward to see what Sony does next, as well as the competition. The Pebble isn’t for me, but it makes Sony’s software efforts look silly, and unless Sony pay the smartwatch arena more attention, they could end up fading away from it, despite the fact they were here from the start.

Those interested in the Sony SmartWatch 2 can purchase their own from Amazon.