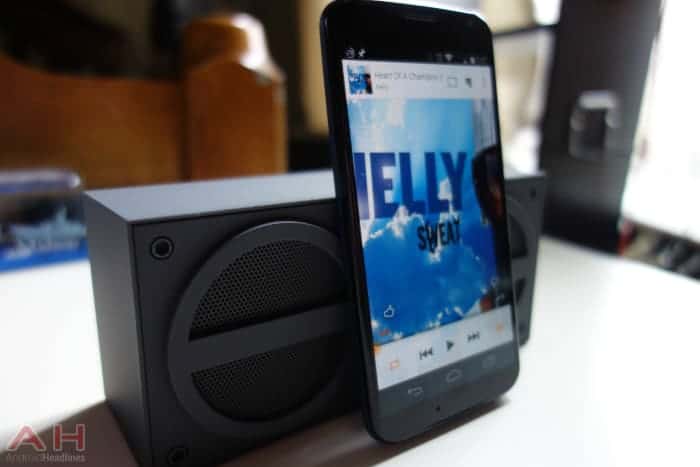 Many of you out there may be thinking that iHome makes speakers, headphones and such for iOS devices. Which is a common thing – I even thought that – simply because of their name. But actually iHome makes speakers that work with Android devices as well. In fact the one we're looking at today uses NFC which isn't in the iPhone. iHome has a ton of great speakers for sale, and we're looking at the iBN24 today. It's a relatively small speaker with the dimensions of 6.2 x 2 x 2.8 inches. And it weighs about 12.5 ounces, making it pretty light weight. This one is available in a slew of colors. I have the gray one here that I'm reviewing right now, but there's also the Green and Purple models.

Earlier I said that the iBN24 has NFC inside, and it does. It's right on the top of the speaker. There's even a little logo showing you where it is, which makes it easier to pair your device with the speaker. Lately, I've fallen in love with speakers that have NFC, because I simply have a ton of devices laying around. And when I want to use a speaker I often time need to pair it again. With NFC all I need to do is tap it to the speaker and within seconds its connected and ready to play some music. Now that may not be a huge deal to most of you, but for me it is as I use so many phones and tablets.

Aside from NFC support, the iHome iBN24 also does great sound quality. Typically I use speakers at about half volume, but I did use this one at full volume for a bit (for testing, not because it was too quiet) and it did not distort the sound at all which is something that doesn't happen often with speakers, but it does happen. And if you're an audiophile like myself, that's a good thing. As far as battery life goes, iHome doesn't actually say how many hours it should last, but I was able to get a good 7+ hours of continuous playback with the iBN24.

The iBN24 from iHome only costs about $55, and it's available from Amazon as well as iHome's website. This is one of those speakers that I would recommend to just about everyone looking for one. As it is a pretty inexpensive Bluetooth speaker with great sound and great battery life.