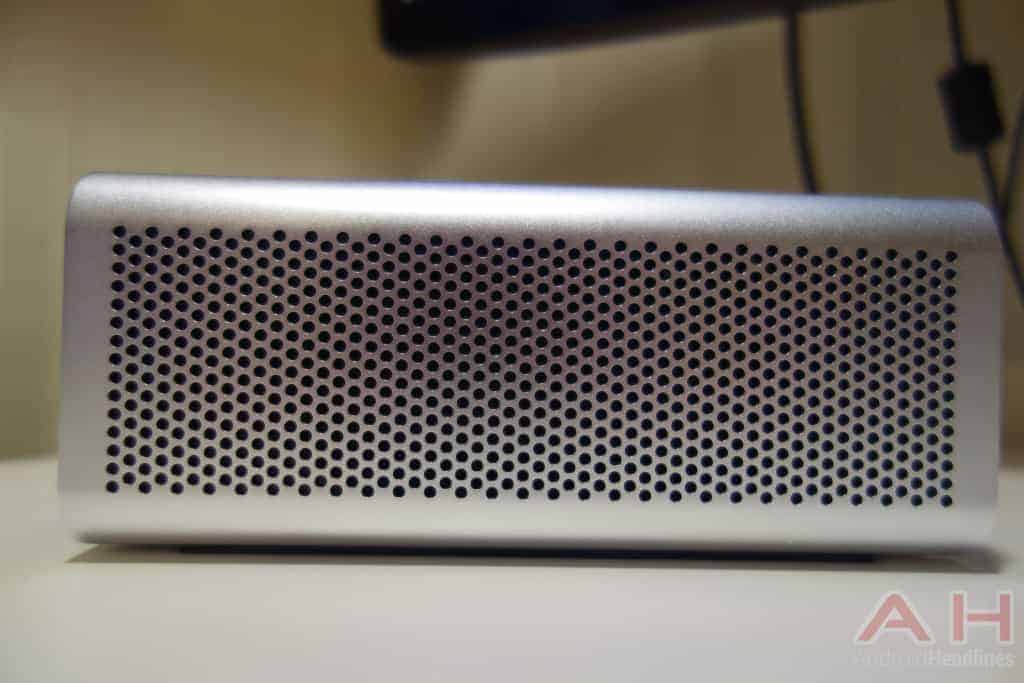 Braven has a good reputation of making great looking speakers, that are also pretty durable. There was the BRV-1 speaker I reviewed, which was my introduction to Braven last year. I was quite impressed with it. As it was drop-proof, and water resistant. Since then, Braven has been acquired by Incipio but they remain their own brand, at least for now. Braven has also made and released a few other speakers, with the newest one being the Braven 710. Which they did indeed show off at CES last month. The Braven 710 is also splash-proof and made of aircraft-grade aluminum. So the build quality is really nice. It also has the soft-touch, type plastic on the sides and on the bottom. Braven is touting about 12 hours of continuous playback with the Braven 710, and I think they hit that mark with the 710.

The Braven 710, is a pretty light-weight speaker, especially considering what it's made of. Not only is it made of the aircraft-grade aluminum, but it also has a pretty big battery inside for playing 12 hours of audio, as well as being able to charge your phone with the 1400mAh battery. Now it's not a huge battery, but it's good enough to top off your smartphone before you head out. It also has NFC built-in, which is probably my favorite feature of the Braven 710. Most of you probably know how I feel about NFC and Speakers or headphones. It's just plain awesome. I love being able to just tap my phone on the speaker and have it connect automatically. In the case of the Braven 710, the NFC chip is on the bottom of the speaker, and it actually shows you where it is. Which is nice because you don't have to hunt it down to pair your smartphone or tablet with the speaker.

Additionally, you can pair two Braven 710 speakers together. Now I only have one of the Braven 710's, so I obviously wasn't able to test that feature out. But this is one of those features that is becoming the next big thing in speakers lately. I know Supertooth, Ultimate Ears and a few others have added this ability into their newer speakers and now Braven has jumped on board. As far as ports go on the Braven 710. We're looking at an Aux in, Aux Out, USB out and Micro USB in. That's it. There's also the battery meter on the left side with the ports, but that's hidden by a nice soft piece of plastic that sits in there, making the speaker look really nice.

For those interested, the Braven 710 does also have a speakerphone inside. So you can take calls with it, if you're into that type of thing. I did take a call or two with the Braven 710, and it performed quite well. While we're talking about sound quality, sort of. The sound quality on the Braven 710 is quite good. But I've come to expect that after using the BRV-1 and the Braven 600. The Braven 710 has 6 watts of audio, so it gets plenty loud, all without doing any type of distortion in the quality of audio, which is great to have. Distorted audio is the worse, at least in my opinion. Now the second most important feature of any speaker, battery life. Braven touts "up to 12 hours" of continuous playback on the Braven 710. And I think they are right on the money with that number. I used it all weekend. Between listening to music, watching movies and playing games, the Braven 710 lasted about 12-13 hours, give or take a few minutes. Which puts it in the elite group of speakers with over 10 hours of battery life, joining the Ultimate Ears Boom which can do about 15 hours.

So where can you buy it? How much is it? Those are probably the questions you're asking right now. Well, the Braven 710 is available from Braven's website as well as Amazon's. It's going for $169.99 on Braven's site, and from $112-135 on Amazon's depending on the color.