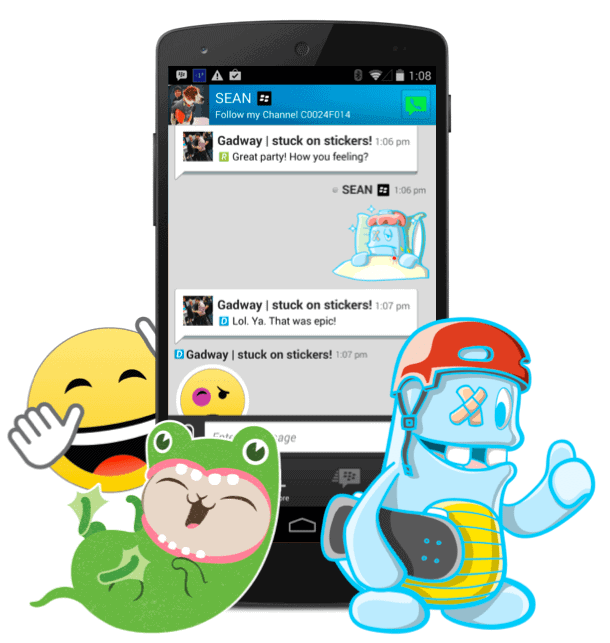 On Friday, Blackberry announced on their blog what's coming next to BBM. Blackberry Messenger finally launched on iOS and Android late last year, making it a cross-platform messaging service. BBM is still trying to compete with the likes of Line, Facebook Messenger/Whatsapp, Kakako Talk and many other messaging apps out there. While Blackberry may be going down, they definitely aren't going down without a fight.

Today, Blackberry is announcing that they are bringing stickers to BBM. Which was in a limited external beta alongside the new BBM Shop. Like with Kik, and Facebook Messengers, Stickers will be separated in "packs" around a character or theme, and some will be 'premium', which you'll have to pay a buck or two for. Blackberry will be promoting a set of original characters at launch, which are CosCat, Gilbert's Tales, Bubble Bot, and it's likely there will be more added over time.

Among others, Facebook and Path have stickers in their sticker components to help bring in some revenue, especially for Path. They've offered stickers from well-established brands like LEGO, Peanuts, and Despicable Me. Which temps users to spend their cash for these 'premium' sticker packs. Blackberry has stated that they will be doing the same with characters from TV shows and movies, although it didn't quite tell us which ones they'll be bringing to the BBM Shop in the future, or what the prices will be.

While this isn't original, it will bring in some revenue, which Blackberry desperately needs right now, and will also bring them to being more competitive with their competitors. As Blackberry needs to be sure they don't lose any of their users, as there aren't a whole lot of them left, and the company is on their last leg.

There's no word on when these stickers or BBM Shop will be available on iOS and Android, but it should be coming soon!