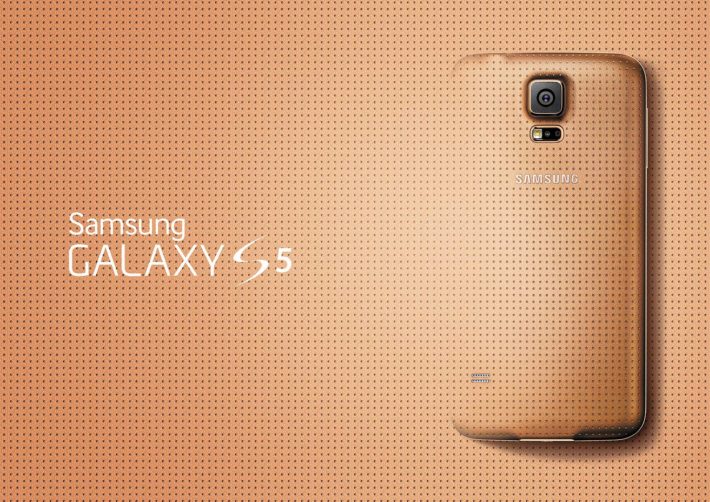 With Mobile World Congress in full swing, there is news flying left and right about new and upcoming technologies.  Right here, I am going to make things easier for you, assuming you are looking for news about the Galaxy S5.  I am going to put all the new features that Samsung threw into their phone in one simple place to make it easy on everyone in this crazy news day.  There are some major features that have been added or altered.  First off is the design of the phone.  Yes, Samsung still decided to go with plastic as the basis of the phone, but the back of the phone is perforated to improve grip, which is a change from the faux leather that some people expected to be on the device.  Whether or not you think it looks good is up to you, but there are going to be four colors available at launch:  Charcoal Black, Shimmery White, Electric Blue, and Copper Gold.  I'm not sold on it yet, it's totally subjective.  The next major add-on is the fingerprint scanner.  It works rather nicely.  All you do is slide your finger over the home key for it to work.  This added security, plus the convenience of it, is definitely a major plus for the phone.

The phone also has a heartbeat sensor on the back right next to the LED flash.  Its function is very straight-forward, and there will be plenty of third-party apps out there that will utilize it even more.  The body of the phone has an IP67 rating, which means that it has the same environmental resistivity as the Galaxy S4 Active.  It is sealed from dust and can resist water for up to three feet for up to a half hour, which is a nice feature to have for those accidents we are all prone to have happen.  The camera is a beautiful 16MP, and is claimed to have a 0.3 second autofocus time.  It can record video up to 4K resolution at 30fps, and the camera has some nice software tricks as well, such as Selective Focus, which allows for users to decide what objects in a shot are sharp and which are blurry, creating some nice camera effects without expensive lenses.

The S5 features the fastest processor in a phone today:  the Qualcomm Snapdragon 801.  This beast, clocking in at 2.5GHz, has Krait 400 cores that are 14% faster than the 800, an Adreno 330 graphics chip that can render 28% more effectively, and a dedicated camera chip that increases sensor processing speed by 45%.  The phone also has support for LTE-A Cat4 multi-band high-speed, which allows for a maximum theoretical download speed of 150Mbps.  One of the coolest features, in my humble opinion, is the Download Booster, which combines Wi-Fi/ac and LTE speeds to provide insanely fast download speeds, up to 650 Mbps.  Sadly, Samsung opted to stick with TouchWiz for their UI, but this rendition of it has flatter and rounder icons alongside reworked menus.  The decision of whether or not it is enjoyed will be dependent on the user.

Samsung also introduced a Ultra Power Saving Mode that turns the phone black and white (the screen, I mean) and turns off all processes and connections that are unneeded.  This should result in some massive battery saving in that state.  The S5 is also the first smartphone to feature the Wi-Fi 2×2 Multiple Input Multiple Output (MIMO) setup, which brings the multiple antenna capabilities found in tablets and home wireless networks to phones for the first time.  There you have it… a plethora of new features.  Is it enough to get you to buy an S5, should Samsung give us the price already?  Let us know down below!