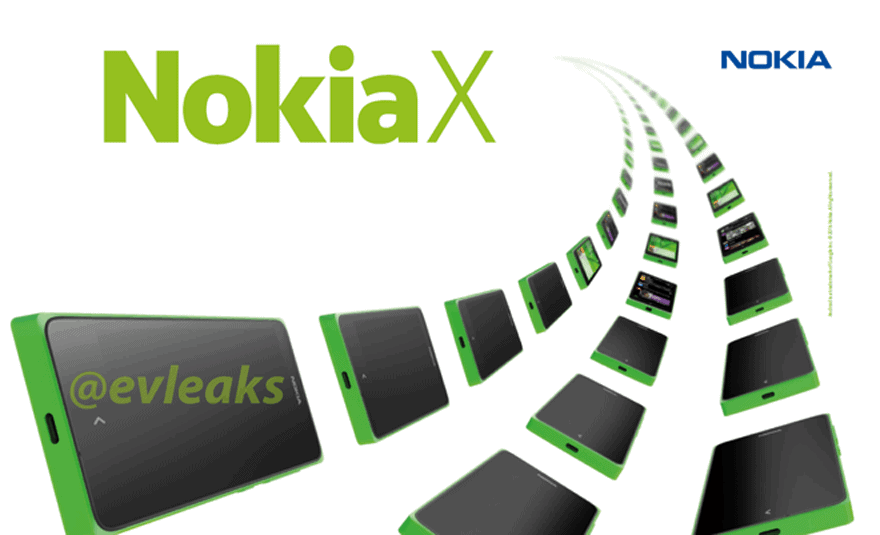 For what feels like forever, we've been hearing about an upcoming Android device from Nokia. Its codename was apparently Normandy and the product is supposedly going to launch under the Nokia X naming. For some time now, we've yet to see exactly what the name of the device is going to be when it presumably launches during this year's Mobile World Congress. Yet another leaked image might hold the answer to the naming of this device. @evleaks is once again showing off a leaked image, and this time it looks to be a press image, something that Nokia would use in order to promote the device.

So, with the naming of the device all but cleaned up, it looks like Nokia is very much ready to pull the trigger on this guy. Despite the fact that it's leaked out a number of times already, there are a few things that are still up in the air. Things like the rear-facing camera's resolution being either 3 or 5-megapixel and whether or not the device is going to be running Android 4.4 KitKat. Considering that the X is all but set to join Nokia's Asha line, we wouldn't be surprised to see something like Android 4.1.2 on here, but with KitKat being so much more frugal, Nokia should be going with that latest version of the OS.

Pricing is going to be the biggest factor, and if Nokia price the X at too high, we doubt that it'll do that well, especially with devices like the Moto G retailing for just $179 here in the US. No matter what though, we can't help but wonder if Nokia is even going to push the X all that hard. It's doubtful that their soon-to-be parent company Microsoft is too happy about Nokia releasing an Android device, especially as Windows Phone used to be Nokia's choice for lower-end devices. We haven't got long before Mobile World Congress opens its doors and we'll finally find out just what Nokia has planned for Android.