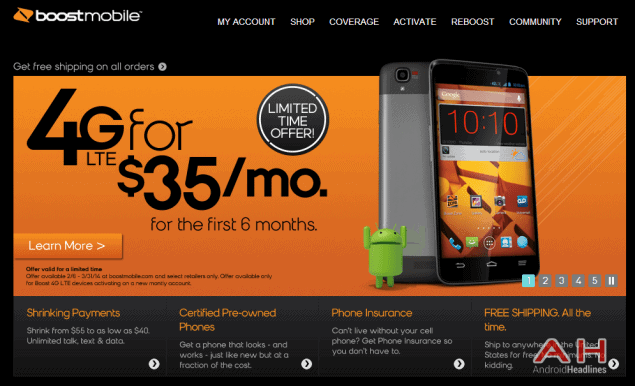 Ok, so we know that many of you are probably already jumping at this deal, but in case you haven't already heard, Boost Mobile is giving customers a limited deal where they can grab an Unlimited LTE Data plan for just a measly $35. Only LTE Data for just $35? Nope. Boost Mobile is offering customers who sign up for service the chance to have Unlimited Voice, Unlimited Messaging, and Unlimited LTE Data for just $35. So you get unlimited everything for only $35. Before you go and knock down some family of four looking for their first wireless plan to get to the register, you need to take note of just a few things.

First, the $35 price point is for a limited time just like the time frame they'll let customers sign up for it. So you have to sign up by March 31st, and once you do the $35 is your price point for your monthly bill for the next six months only. After the six month period is over and done with you'll end up having to pay the full price for the service, which is $50 a month at the regular rate. Still not bad when you consider the prices of other plans elsewhere. However, you'll want to make sure Boost can cover your service needs first. Basically just make sure you'll have service where you need and/or want to use your phone.

Second, the data as most people will tell you with plans like this one, isn't truly unlimited. That's neither here nor there, and really boils down to an opinion, but I digress. You'll never run out of data, but the speeds will throttle down from LTE as soon as you use up 2.5GB of data, so you could end up with slow data speeds at some point if you're not careful. So there you have it, Unlimited Voice, Text, and Data at LTE speeds for just $35 a month for six months. If price is something that doesn't matter when it comes to your wireless plan, then this deal probably isn't for you. However, if you wouldn't mind saving a few bucks and this sounds good to you, you can head to the Boost website to sign up or go in to a Boost Retail location in your area. As far as phones go, you can grab yourself a Galaxy S 3(we know, two years old) for $399, a Boost Max for $299, or the awesome Moto G for $129.