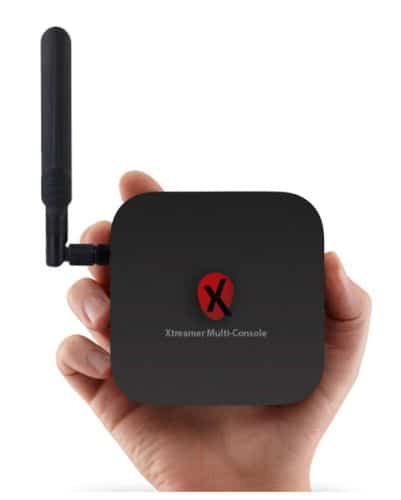 There are already plenty of available options in the way of home game consoles. Users also have their choice of a varied combination of wireless display adapters and media center devices. Xtreamer, aims to be the swiss army knife of modern home technology and give users the all-in-one device that can act as your game console, you media center, your wireless display adapter and more. The Xtreamer is a little Android TV box that has tons of software loaded onto it, giving it the capabilities of all these devices in one.

The box itself looks rather tiny, and has an antenna that resembles the ones you see on some wireless routers. It comes pre-loaded with XBMC (Xbox media Center) software for all your media management needs, and it features support for Apple Airplay tech via the Airpin App for Android. It also comes pre-loaded with the Cheapcast app, which enables it as a sort of Chromecast like device. You would think that the device would stop there, but if you did you'd be wrong. In addition to just those few handy features the Xtreamer also has support for Miracast wireless display technology and it can support DLNA devices too. Not only that, but it also has the DroidMot server built-in, which basically turns your Android smartphone or tablet into a remote. When paired with the pre loaded Airdroid app, you can manage your PC's data and media fairly easily. Not content with what Xtreamer has to offer so far, it also comes with Pushbullet software that lets you view your Android device notifications on the TV. Now that's pretty slick.

As far as software goes, the little Android box that has set out on a mission to provide everything to its user comes pre-loaded with ClockworkMod Recovery of all things, just in case you want to… load on a Custom ROM? In all seriousness its more than likely meant to be used for backups, but a custom ROM sure would make it even more interesting. The Xtreamer is powered by a Rockchip RK3188 Quad-Core processor, has 2GB of RAM, will store up 16GB of content internally with expandable storage capabilities via the microSD slot, and supports WiFi 802.11n, and Bluetooth 4.0. Connection wise, you can hook it up to your TV via the HDMI port, and should you want a more reliable connection than WiFi, you can hardjack it in via the Ethernet port. It also has 2 USB 2.0 ports, and comes with a wireless air mouse. Overall, it seems like the Xtreamer is a very capable, but perhaps overloaded piece of hardware. Especially when you consider the price, which ends up being around $176. Is all that this little box offers worth the price? Let us know what you think in the comments.