A Chinese company, Shenzhen Migoal developed a tablet "dock," called TransMaker that works with the Samsung Galaxy S3 and Galaxy S4 smartphones.  Like most docks, it does very little on its own, instead using the "computing power" of your S3 or S4 to run the show.  The TransMaker turns your smartphone screen into a larger touchscreen display, as well as having its own battery that will also recharge your phone while it is docked…and Migoal also plans on offering a dockable keyboard solution.  As a separate purchase, you can get a Bluetooth dialer, which will allow you to answer or place a phone call while your Galaxy S3 or S4 is docked.

Migoal first showed us this device back in August, but you could only sign up for more information at the time. Whether they planned to fund this product through Indiegogo at the time, was not made clear, however, that is exactly where Migoal hopes to raise $100,000 in the next 44 days to make the TransMaker a reality. They go into great detail about the product and its many benefits, some of which are listed below: 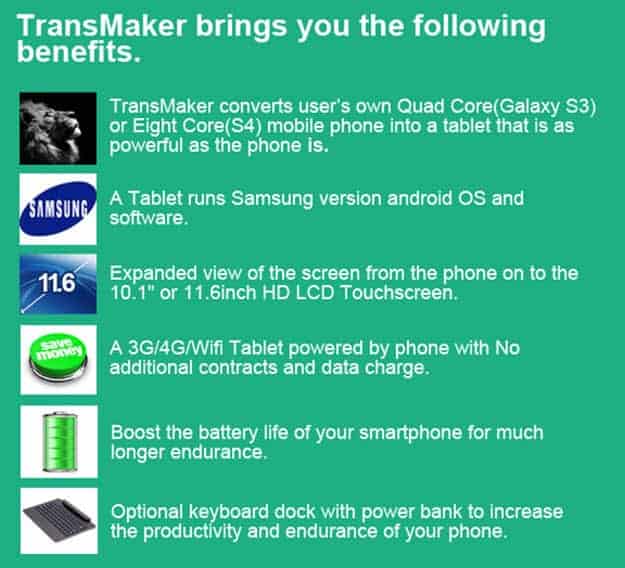 Before you "invest" your hard-earned money at the Indiegogo website, please be aware that this is what they call a Flexible Funding Campaign, and if the entire $100,000 goal is not reached – the campaign/company gets to keep all of the donations – you will not receive a refund. Also, make sure that you read through all of the questions and answers near the end of the website as there are a few "disadvantages," such as the home screen will always be in portrait mode with two black bands on either side on the display – only games and apps that work in landscape will do so on the TransMaker.

Clearly, Migoal is trying to mimick the ASUS's Padfone, but it will be tough for the TransMaker to work as well as the Padfone, as both smartphone and "dock" are made by the same company in the ASUS Padfone situation. Third party devices do not usually stack up to what the original manufacturer can do with its own equipment, but time will tell.

There are "package deals" depending on the amount that you contribute, for instance, a $1 you get a "BIG THANKS," for $30-$40 it will cover shipping for someone who "forgot" to include it with their purchase, and for $99 you can get an "early bird TR10" and there are 300 of those available, and so on. Check out the Indiegogo page for a complete list of packages available.

Below is the video that Migoal posted on the website:

Let us know on our Google+ Page if the TR10 or TR11 are something that you would be interest in purchasing or investing in at this time. If all goes well, Migoal is hoping to start shipping the device in March 2014.