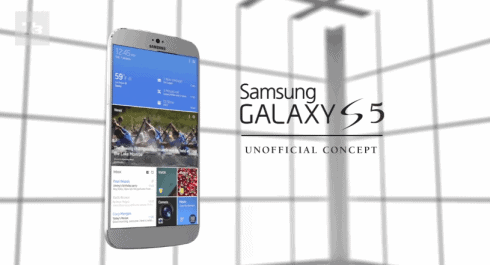 Google's Android operating system is utilized around the world, and their amazing phones have a reputation of blowing users away with beautiful design combined with sheer power under the hood. Concept renders of possible future phones are always interesting and enjoyable to look at. T3 has made some pretty impressive unofficial renders in the past and the latest from them is no different. They posted the following video to their YouTube channel to show off their unofficial render of the Samsung Galaxy S5. The render looks clean, has a sleek design to it and is by all means excellent eye candy.

Samsung Galaxy S-Series phones have had an amazing reception with consumers in the past. The latest iteration, the Samsung Galaxy S4 has been somewhat of a blockbuster and is beloved by many Android users. The SGS4 has some nice specs and gets the job done as it is, so it will be interesting to see how Samsung will outdo itself with the SGS5. That expectation for Samsung does give T3 reason to come up with ideas to get Samsung's attention about what consumers may want to see on the SGS5

T3 did an excellent job on the render and the video to showcase it. They point out rumored and leaked specs in the video and the render is intended to be a Samsung Galaxy S5 with all those specs rolled into one massive powerhouse of a phone. Among the possibilities that they mention are a 5-inch 2K QHD Display, 4 GB Ram, 8 Core Processor, the concept Magazine UI, Quad Front-facing speakers and a 16 megapixel camera. Those specs sound pretty good and I hope they make it into the official version of whatever Samsung is cooking up to release this year.

If you want to see the render for yourself, check out the video below:

I like the design of the render that T3 has made and would love to see a version of that make it on the next SGS5. Now that you have had a chance to take a look at the video, I ask you the following: What did you like about the video? What did you not like? What would YOU like to see on the next Samsung Galaxy S5? I invite you to share your thoughts on the render in the comment section below.